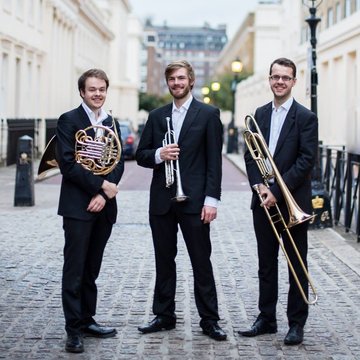 Brass ensemble
London
Verified profile
One of the UK's finest young Brass Ensembles performing in London and across the UK. Available for recitals, weddings and private events

Buck Brass Trio is one of the leading young brass ensembles in the UK, and was formed in 2012 by graduates from London’s Royal Academy of Music. The members are Daniel Walton Trumpet, Timothy Ellis French Horn and Richard Buck Trombone. The Trio has pioneered for a large amount of new repertoire for the Brass Trio, including transcriptions of works by Bach, Piazolla, Ibert, Beethoven, as well as collaborating with young and established composers. The Trio have a busy performance and recording schedule and they have performed in prestigious venues including HM Treasury, London Guildhall, St James's Piccadilly and Southwark Cathedral. Members of the ensemble have enjoyed considerable experience working with groups such as the Britten-Pears Orchestra, Il Divo, Royal National Orchestra of Scotland, London Sinfonietta, BBC Scottish Symphony Orchestra and renowned conductors including Semyon Bychkov, Marin Alsop and Sir Mark Elder. Buck Brass Trio has enjoyed a considerable amount of coaching from many illustrious musicians such as Robert Hughes, Michael Dussek, Michael Thompson, Mark David, and Elgar Howarth. The Trio produces an annual virtual Advent Calendar consisting of Traditional and Modern Christmas Music which has grown in popularity each year and is now viewed by thousands worldwide. The Trio is available to provide music for recitals, weddings and private events.

Fantastic sound, and very well received at our event. Would definitely hire again: professional, friendly and a great variety of pieces to keep us entertained. Thanks guys!