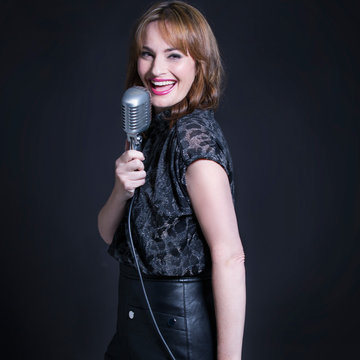 Since as long as she can remember East London born Beverley has been immersed in popular music, starting with the Great American songbook interpreted by the likes of Frank, Ella, Nat and Billie. Contemporary artists such as Carol King and Amy have also had major influences. The key has always been the combination of melody, musical arrangement, emotion, and the story to be told – the more soul searching the better. Her professional adventure started after leaving her 9-5 job and taking on a singing engagement on the high seas. Her deep love of singing and performing was discovered and her future mapped out. Since then she has travelled to many parts of the world, appeared on British television, and secured long term residencies at prestigious central London venues. More than happy working as a jazz singer with small groups or fronting a swinging big band, Beverley has performed at some of the finest venues in the land including Ronnie Scotts, the 606 Club, Pizza Express Soho, The Hideaway, The Hippodrome and The Forum. Whilst cultivating her song writing career she has worked with some of the country’s foremost musicians and producers, and her debut album Butterfly Rising is available to buy on iTunes and Amazon.

“We always try our best to be flexible to help ensure your event runs as smoothly as possible. If timings change slightly in the run up to the event just let us know

Absolutely. This is a really popular request and I can offer this service for free. If you'd like a DJ service via our PA after the final set until the venue closes, we provide this for an additional £100.”

I usually set up about 1 to 1.5 hours before the performance time. As soon as our PA is set up we can provide a free playlist service to help set the atmosphere and get your guests ready for our live performance!”

“My set lists are crafted from countless performances and learning what works best to ensure guests dance and have an amazing time. However, we're definitely happy to chat through and make sure we find what works for your event.

“Yes, absolutely! I bring my own backing tracks to sing to. Or If I’m working with musicians they have instruments.

“If a song isn't included in our song list there may still be a chance we already know it. If there is a special song you'd like me or if I’m booked with a band we are happy to do this for you. There is a fee of £30 for this service to take into account rehearsal times etc. ”

Rebecca Keen CASTING PROFESSIONAL Nov 4, 2011 Recommended for: Eye Candy Caddies need a female Singer - London Hide listing title Bev is not only an outstanding vocalist but a great Eye Candy Caddy too! She is very professional and hardworking. Her beautiful voice received many compliements from my clients and we were very priviledged that she allowed us a couple of encores. It was great having Bev as part of our golf day and we will be using her at every golf day from now on! We highly recommend Bev and cannot sing her praises high enough! Thank you Bev for a really great performance!

Date: 8/4/16 Date: 8/4/16 To whom it may concern, Testimonial: Beverley Stone I would like to express my confidence in the ability and professionalism of Beverley Stone. We have always found her to be a consummate professional who has never let our agency down. We haven’t had any negative comments about Beverley, only compliments from our clients. I am happy to put my name down as a referee for Beverley Stone as when available, she is top of my list as a lead vocalist and bandleader. She not only has an excellent singing voice but leads by example. She always arrives at the venues early and has very good management skills. I cannot remember a time when Beverley has called me up with a problem in getting to a venue on time. She keeps in contact with her musicians and informs them of all information and schedules (which means we only have to pass out the information once which stops the individual musicians from contacting my agency directly regarding bookings, directions, timings etc.) If you require any more information about Beverley, you can contact me via email; [email protected] or my personal mobile which is +44 7768 723392 Kind Regards, Chris Lees Pepperpo