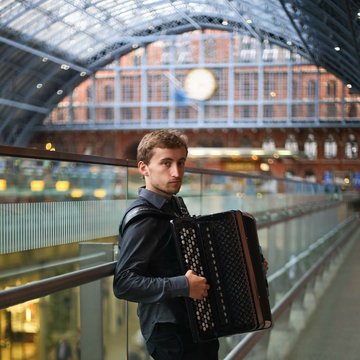 Ben is a classical accordionist and accordion teacher, and runs the Cumberland Ceilidh Band. Ben is also a choral conductor and singer.
3 of 12 photos
Accordionist
London
Verified profile

Ben de Souza is one of a growing number of young British accordionists dedicated to promoting the instrument in this country. His playing shows "great technical assurance and control, beautifully understated expression, and real soul." He studied classical accordion with Owen Murray at the Royal Academy of Music, having previously studied with Romano Viazzani. He has participated in master classes with many of the world’s top accordionists including Friedrich Lips, Mario Stefano Pietrodarchi, Bjarke Mogensen, Mie Miki and Matti Rantanen. Ben is a regular recitalist and has performed extensively throughout England, while he is also an active chamber musician, forming partnerships with strings, piano, oboe, soprano and percussion respectively. He has also collaborated with the West Forest Sinfonia Chamber Ensemble, as well as working on new works with composition students at the Academy, Trinity Laban and the University of Cambridge. In May 2018 Ben made his orchestral debut with the Philharmonia Orchestra under the baton of Vladimir Ashkenazy. The accordion takes Ben across the UK and has allowed him to perform in such venues as St David’s Hall, Royal Festival Hall, Royal Birmingham Conservatoire, Stoller Hall, Shoreditch Town Hall, Blackheath Halls, South Hill Park Arts Centre and the Bloomsbury Festival. Away from performing Ben has had a busy career as an accordion teacher in London and previously held the post of visiting accordion teacher at Peter Symonds College, Winchester. He is also a founder member of The Cumberland Ceilidh Band. Ben is an accordion repairer for ZZ Music in North London. Ben is also a freelance choral conductor and holds a Masters in Choral Studies at Cambridge University. He is Choir Director at Clare Hall, Cambridge, Musical Director of Farnham & Bourne Choral Society and also works with choirs at the John Lewis Partnership and Finchley Children's Music Group.

BS
Bert S
3 years ago, for a Concert in Cambridge Accordion Club

As a demonstration of the scope of the modern accordion, it couldn’t have been better. Such a range of style and understated expression delivered with excellent technical control, and real soul in your playing. You bring the music to your audience without fuss or histrionics and the impact is the greater for that.

RV
Romano V
4 years ago, for a Concert in Ringmead

Ben de Souza incorporates the classical accordion into the chamber ensemble with great success. His reasons for doing so are explained clearly in his introductions to each piece. The final result is illuminating and delivered with artistic refinement.