COVID-19 - we’ve adapted and we’re here to help you.
Guitarist 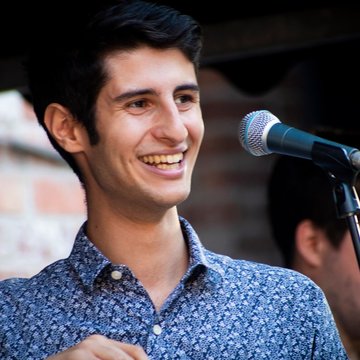 Cipolla is essentially a 2018 reincarnation of Nick Drake crossed with the ‘Sunny Side Up’ vintage era of Paolo Nutini.
3 of 8 photos
Guitarist
Manchester
Public liability insurance of £10 million

Ben Cipolla is a Wiltshire-born singer-songwriter, and has recently moved to Manchester. His singing has been compared to “having liquid chocolate dripped in your ears,” and his distinctive upbeat and percussive guitar style is inspired by the likes of Nick Drake and Jack Johnson.

Standard Prices
All prices include:PA equipment, meet up before the event either online or in a coffee shop, song requests that you would like me to learn

With a wry smile, Clare Teal explains that this concert, First Ladies of Swing, has been two years in the planning. Since its genesis, there was the Swing Jazz Prom in 2017 that featured tonight’s guest vocalists – all of whom are male. Later, conductor Guy Barker leads a tribute that he arranged to ‘that well known First Lady of Swing, Ray Charles’. Misnomer aside, this concert does form an exceptionally fine tribute to such queens of swing as Ella Fitzgerald and Lena Horne, as well as swing in general. The stars of the show are undoubtedly Clare Teal and the City of Birmingham Symphony Orchestra (CBSO) under the baton of Barker, who also arranged most of the evening’s music. Teal acts both as vocalist and MC, singing with aplomb and discussing the music with wit and warmth. Her voice has a richness to it and she can certainly deliver a song. She also gives every indication of thoroughly enjoying the entire evening – as do the members of the CBSO whose heads often bob in time as they await their cues. Teal is equally at home with the upbeat, for example, Singin’ in the Rain as the wistful Secret Love, which also benefits from an atmospheric string section. Throughout, Barker conducts with authority and efficiency of movement, leading the CBSO to effortlessly strike just the right mood. Teal emphasises the importance of supporting live music and the bringing on of new talent – borne out in the choice of guest vocalists, all of whom are young men who are supremely talented: this evening is a real treat for the ears. We are introduced to Scandinavian Mads Mathias as he sings Some Day You’ll Be Sorry. There’s a lovely crooning tone to his voice, recalling a younger Jamie Cullum. Later we meet Ben Cipolla who, Teal says, she first came cross when he was busking. He reminds one of a young Sinatra when he sings Young at Heart in the first half, but any suggestion that that’s all he is is soon dismissed when he sings I Only Have Eyes for You accompanying himself on guitar. This is a truly magical performance from Cipolla and one that justly brings tumultuous applause. The final guest vocalist, ROB.GREEN, also produces a moment of pure magic with Georgia On My Mind – ROB.GREEN and his performance are really something special. These young singers produce truly memorable performances for all the right reasons. What is gratifying to see is how much all the vocalists appear to enjoy the evening and each other’s company, as shown when they share singing duties, for example, in their fun rendition of Hernando’s Hideaway. Their enjoyment raises the performances to a higher level as their enthusiasm infects the audience. The orchestra also has the opportunity to show off its skills in two tributes, one to Ray Charles, the other to Quincy Jones. Here, as elsewhere, they show they can really swing causing almost involuntary swaying and foot-tapping throughout the auditorium. However, when the CBSO is really swinging it can overwhelm the singers’ voices meaning that some lines are inaudible, especially before the interval, which causes some frustration to the listener. Nevertheless, this evening proves that the future of Swing is secure when there are performances of the calibre seen tonight, performances from rising stars who are surely destined for the very top of the tree.

Jazz megastar, Clare Teal, is a great discoverer of new talent. After all, she discovered Jamie Cullum. Just five years ago, she was walking down Marlborough High Street on the way to her gig in the big marquee at the International Jazz Festival when she saw a young lad busking a Michael Jackson song. She was so taken with his talents that she invited him then and there to do a spot in her show singing, as a duo, the Marvin Gaye, Tammi Terrell classic, ‘There ain’t no mountain high enough’. From there Ben Cipolla’s career has not looked back. Not for nothing has his voice been described as ‘like having heavy liquid chocolate dripped into your ears, smooth and rich.’ In those four years he has gone from appearing at the Marlborough Fire Station to performing in the ‘Battle of the Big Bands’ at a Promenade Concert at the Royal Albert Hall, where he sang, the Boswell Sisters number, ‘Roll on Mississippi, Roll on’, with Clare and another rising star, Cherise Adams-Burnett. Those fortunate to have attended this year’s Marlborough Jazz would have seen this fantastic trio at the Town Hall just a few weeks earlier. Ben was in good company at the Albert Hall. There were at least ten other performers who’d played Marlborough Jazz on the stage, including Clare, band leader, Guy Barker and the great American saxophonist, Pee Wee Ellis. Ben, from Great Bedwyn, was educated at St. John’s School and read Popular Music (what else?) at the University of Gloucestershire. He formed his jazz septet while still at school. It includes fellow former St. John’s pupil, Jonny Budd, who went on to read Modern Languages at Oxford, on electric guitar and ex-Marlborough College boy, Dan Springate, who became a multi-instrumental music student at Manchester. Not exactly flush with money, they travelled to their earliest gigs by National Express! They appeared at the opening ceremony of the Weymouth Olympics in 2012 and they were voted ‘Best Newcomer’ at the Marlborough Jazz Festival in 2014, an event, which he acknowledges, ‘gave us such a great starting platform’. They’ve appeared at such top festivals as Cheltenham and Glastonbury and at such top locations as the Cadogan Hall. It’s difficult to disagree with Jazz FM presenter, Ian Shaw’s simple assessment of Ben Cipolla. ‘He will be huge. Mark my words.’

The man plays Swing, he plays Jazz, Soul, altered Blues, Bop – he slows things down to an infinitely slow crawl and then fires it up again. The lyrics are little vignettes of living brought to life by his spectacular guitar technique and this voice. This wonderful voice. It’s a bit like having liquid chocolate dripped in your ears, smooth and rich, a truly spectacular instrument. I wasn’t going to single out a track for special mention as they were all of such a high standard but what the Hell – ‘Chameleon’ was absolutely brilliant.