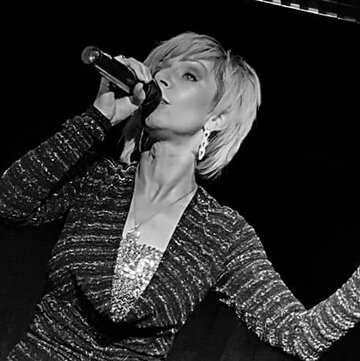 Becky Rok is an International Award Winning Vocalist. She has many years’ experience, as she has been performing for more than 20 years worldwide, in a variety of different capacities and venues. She started her career working in Japan as part of a show which incorporated both singing and dancing for her but the show included other acts such as belly dancers, fire eaters/entertainers and magicians. This show was such a huge success that it then toured across Hong Kong, Singapore and Bangkok. Her next port of call was with a band called 'Kashmir'. This was a three piece band with Becky singing both lead and backing vocals. They worked on both Mediterranean and Caribbean cruise ships doing stints of between three and six months through the summer. During the winter period and the run up to Christmas they then toured the British Armed Forces across Germany. The band performed a variety of music genres' to suit the venue they were playing. The army lads loved a bit of soft rock; Gun & Roses, Heart, Whitesnake etc and "this rock chick is awsome". Next stop was Athens, Greece. Becky worked here again, as part of a large show as a singer and dancer alongside other Greek entertainers’ such as singers and Turkish belly dancers in a typical bouzouki club. It was here she carried out an audition for her next job which took her to New York. In New York she initially worked again, in a Greek style bouzouki club called 'Sirrocco' just outside of Manhattan. It was very similar to the one in Greece as it was owned by the same people. Becky then obtained a contract to work in some of the big New York City Hotels where they held Vegas style cabaret evenings. She sang with some the top New York entertainers. Upon her return to the UK, after many years of travelling, she has entered into the club circuit as a self-contained vocalist. Becky has a very big, amazing and powerful voice. She also won “Artist of The Year 2014” as voted for by Coventry and Warwickshire Entertainments Council. She is currently available for all events including clubs, birthdays', weddings, parties, private functions and much, much more. She can provide a vast catalogue of floor filling songs from across the decades which include some of the old classics, 60's, 70's & 80's, motown, right up to present day.

Becky Rok - International Award Winning Vocalist (solo)
•Summer of 69 - Brian Adams
•Don't Stop Believing - Journey
•Stuck In The Middle - Steelers Wheel
•3 Little Birds - Bob Marley
•Turn Back Time - Cher
• Give a Little Respect - Communards
•2 Out of 3 - Meatloaf
•Everybody's Talkin - Beautiful South
•We Found Love - Rhianna
•This Is Me - from The Greatest Showman
•Higher and Higher - Jackie Wilson
•My Girl - Temptations
•Build Me Up Buttercup - The Foundations
•Proud Mary - Tina Turner
•Turn Back Time - Cher
•I Will Survive
........Plus many more .floor fillers
Totally Dynamite 70's Themed Show
•Waterloo
•Hot Stuff
•YMCA
•Relight My Fire
•I Will Survive
•You To Me Are Everything
•Stuck in the middle with you
•Twist and Shout
•Crazy Little Thing Called Love
•Disco Inferno
•Higher and Higher
•Young Hearts Run Free
•Blame it on the boogie
.........Plus many more .floor fillers
Customer questions

This is a really popular request and I actually offer this service for free by way of pre-recorded background music which is a mixture of 70's - 90's. If you require something different it can usually be arranged. If it is something more unusual there may be an additional cost.

I usually set up about 1 to 1.5 hours before the performance time but can be earlier if there are other things happening at the event. As soon as the PA is set up I can provide some backgroung music to help set the atmosphere and get your guests ready for my live performance!

My set lists are crafted from countless performances and learning what works best to ensure guests dance and have an amazing time. However, I am definitely happy to chat through and make sure we find what works for your event.

Yes, absolutely! I bring my own PA, speakers, lights, backing tracks etc. Everything that is required to give my best performance and to give you and your guests a night to remember.

Amazing, unique vocals, great personality & interaction with the audiance, high energy shows and the ablility to suit any ocassion. "Absolutely amazing singer/performer with a beautiful personality, great to work with and very professional. Do not hesitate booking Becky for any event that requires the icing on the cake."

I have worked all over the world for many different venues. Japan, Hong Kong, China, Singapore, New York, Greece, South of France, British Armed Forces in Germany. Some Cruise ships.....plus much more.

The were all amazing in their own right.

This was the first time here for Becky and she gave a very lively performance plus some nice ballads in-between. A fine night’s entertainment from this young lady.

Last today was Becky Rok, this was the first time I had seen this young lady and I and the audience were impressed. She has a good voice and stage presence to match. I am sure we will be seeing a lot more of Becky Rok.

First time at our club tonight was a lovely young lady named Becky Rok. What a cracking night she gave us with her brilliant singing voice. Our members and guests loved her performance. Thanks Becky and we will see you again next year.

Becky Rok started our evening. New to our club, the members gave very positive feedback - hopefully, we shall Becky back in the near future.

Last to entertain us today was Becky Rok and as the name suggest she is a bit of a rock chick. Not exclusively you understand but it is in that area that her passion for music lies. It just so happens that I like that type of music (well the soft variety anyway) so it comes as no surprise that I thoroughly enjoyed Becky’s half hour mix of music. I reckon that you’ll like her renditions too, so let’s cut out the shilly-shallying, give Becky a booking. I think that you’ll be glad that you did.

To open BECKY ROK, here you have a young and vibrant singer and dancer who performed a nice mixture of up market numbers which pleased the audience.