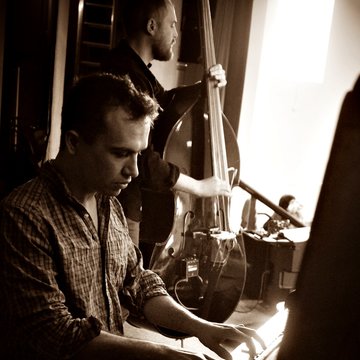 Barney is a classical trained pianist and accordionist based in Leeds working as both a performer and tutor.
3 of 7 photos
Composer
Leeds
Public liability insurance of £10 million
Verified profile

Barney has been a musician all his life starting off as accordionist at the age of 6. He began by playing at folk venues in his home county of Somerset fore taking up the piano and moving into classical repertoire. At the age of eighteen he moved to Leeds to study classical music at Leeds college of music where he gained a BA in classical piano and a masters in music composition. Having completed his studies, Barney took up piano teaching and regular work as a solo performer on accordion and piano as well as working as an accompanist. He now performs for weddings, events events both as a solo performer and in multiple ensemble projects. His main ensemble project, Kibitz, have had a successful first two years since he helped create the band in 2016. In that time they have recorded an Ep, played at multiple festivals (including Lattitude), They were also featured in documentary about the Jewish community in Leeds, soon to be released on the BBC. He also plays in folk bands and various jazz, gypsy jazz and pop projects. Outside of performing work, Barney also composes and has written works for his band and solo piano and accordion pieces of a range of styles.

Yes I am very happy to do this. I charge £100 per hour for the DJ service. Lights and PA are included.

Yes as long as it is in tune and working

Yes although depending on how many this may effect the quote.

Yes. I can usually do this for free, I just ask that the song be requested well in advance so I have time to learn it.

Standard Prices
All prices include:All equipment provided and happy to negotiate on
Barnaby

5 out of 5
10 verified reviews
Satisfaction

Absolutely wonderful! So talented, so seamless, amazing communication. He made our wedding ceremony and drinks reception perfect!

AB
Andrew B
4 months ago

We were very happy having Barnaby play at our wedding. He was very easy to work with before the day and on the day, he did exactly as we asked without us needing to worry. Did a great job!

Barnaby added so much to our event. He was a pleasure to work with. Would highly recommend

We booked Barnaby for our wedding reception - very professional service and the music was lovely, exactly what we wanted. I would definitely recommend.

S
Simon G
4 years ago, for a Recording session in 311 Stonegate Rd

It was a privilege to have Kibitz play on my recent BBC One Documentary ‘The Jews of Leeds’ Their live act is fun and full of energy, and inspired me to pick up a guitar and discover my own Eastern European roots through their music. We all need more Kibitz!