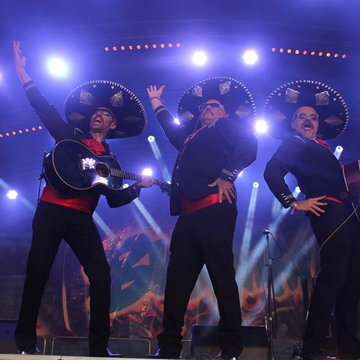 We are a comedy mariachi band, performing songs from Abba to the Pistols, in a mariachi style!
3 of 18 photos
Mariachi band
Watford
Public liability insurance of £10 million
Verified profile

We are hotter than a jalapeno, performing nationwide at weddings, corporate events, military balls, awards ceremonies etc. We will wander amongst your guests and perform rock and pop classics from Britney to Oasis, Kylie to Quo, all in a fun Mexican mariachi style! The name of the game is audience interaction - perfect for reception or dinner music. Previous customers include Amazon, Santander, Comic Relief, Wembley Stadium, Sports Relief, Tesco's and many others, at venues including Grosvenor House in Mayfair, Old Trafford, the Camden Roundhouse, Sandown Park Races, Twickenham Stadium and many more. We performed for comedian Jack Whitehall at his home in London, and also ITN newscaster Romilly Weeks’s birthday party, again at her house, and at Olympian Rebecca Addlington’s sister’s wedding where Becky was a bridesmaid (this was featured in various magazines such as Hello). We are also constantly in demand for TV work on both sides of the pond!

Slight change of timings are not a problem, however we’d need to know ASAP. A lot of our bookings are afternoon and obviously if we have an evening gig we may be tied to an end time.

This isn’t something that usually applies to us, however for certain events we can

Minimum of half an hour to change clothes, tune guitars etc. If we are using PA which is not our norm, we’d need a minimum of one hour.

This is exactly what we do!! Though equally we can perform onstage if that’s particularly required, but this is generally not what we are about!

It’s bit something we’d normally do as big akl songs suit our style. However feel free to ask as long as refusal won’t cause offence!!

It’s the audience interaction, originality and sheer fun that people love most. There are no other acts in the country offering quite what we do! And of course we provide excellent photo opportunities!!

I’d pick three - TV comedian Jack Whitehall’s Xmas party at his home - guests such as David Walliams enjoying some Xmas mariachi!! Then there was Sports Relief 2016 at the Olympic Stadium, full coverage on BBC, and most recently out appearance Jan 2019 on Channel 4’s Come Dine With Me!!

NEW!Virtual services
Personalised Music Message
Book me to create a unique music video for you to send to a friend as a gift. This could be a birthday message, first dance song for a wedding anniversary, or just your friend's favourite song to cheer them up.
£25
Beato Burrito duo
Three songs via online platform eg Zoom. Longer events are possible
£45
Beato Burrito

5 out of 5
32 verified reviews
Satisfaction

We had the pleasure of having Beato Burrito play at our wedding and honestly, what a fantastic band these guys are! We had them play during the meal and after at our wedding reception, an absolute hit people are still talking about them! Really lovely guys too and such a great mix of songs - they did every request and so professional. I'd book them again in a heartbeat 😁♥️

Aw shucks! Fabulous venue and party and we had an absolute ball!!

They made the day!

From booking to the performance, Beato Burrito were absolute Pro’s. Nothing was too much of an ask, and they responded to any queries immediately. The music was fantastic, and their stage presence was infectious and got the whole room dancing. All of our guests haven’t stopped talking about them!! A+++

A lovely time and a great couple to work for. And can’t recommend King St Townhouse enough , a really lovely venue to play in

CR
Courtney R
3 years ago, for a Wedding in Lodge Park

What a magnificent day, thanks so much Andy and team. The band absolutely set the tone of the rest of the day for us and the guests absolutely loved it. We have some magnificent photos, and everyone talks about the surprise mariachi band!!!

I cannot recommend these guys highly enough - they were fantastic! They were great entertainment and the way they played and worked around the room from group to group certainly got the party going for everyone. If you are after something a little different for a wedding band then look no further!