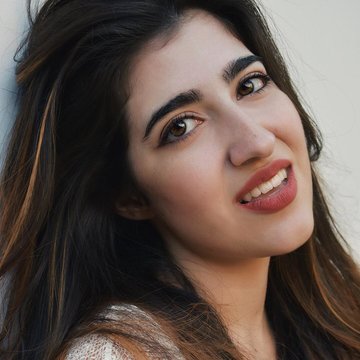 A versatile, outstanding singer for any celebration! Classy and diverse. Able to create an ideal setlist and atmosphere for your event!
3 of 15 photos
Singer (soprano)
Manchester

Avra Haraka is a professional singer (soprano) from Greece, a graduate of the world-class conservatoire Royal Northern College of Music where she was certified with a Bachelor of Music with Honours. There, she followed the 4-year program of Vocal Studies & Opera and trained her voice classically with mezzo-soprano Antonia Sotgiu whilst also performing in masterclasses, recitals, competitions, and Opera productions. Since graduating, Avra has also had the pleasure of joining a young opera singers' training course by Camerata Bardi Vocal Academy in New York. Avra has been fortunate to work with many acclaimed Vocal Coaches/Vocalists, specialists of varying music scenes (Opera - Jazz - Crossover - Pop) who have helped to enrich her musicianship and artistic visions with their invaluable advice and insight. Due to this, Avra felt inspired to form her own creative Live Music project, "Rhythms of the Mediterranean", bringing together Pop, Latin, and Classical musicians in a crossover performance that explores timeless Greek and Spanish songs including folk, tango, boléro, Latin ballads, and popularised renditions of famous melodies. The show was premiered in 2019 and received with great warmth and enthusiasm by the audience, who were uplifted and compelled to dance! Moreover, Avra often works with pop musicians, rehearsing and studio recording with them, and really enjoys experimenting with various musical genres and styles. In October 2020, she released her debut Pop single "Castaway", a collaboration with emerging Artist/Producer Elia, a track that was described as cutting-edge, genre-blending, and full of innovative production and alluring vocals. In earlier years, Musical Theatre was at the centre of Avra's life and she has lots of onstage experience in this field, including performing as the lead role 'Reno Sweeney' in Cole Porter's musical ANYTHING GOES, and performing in the musical GODSPELL at the renowned Edinburgh Fringe Festival. Avra is a charming vocalist and performer who is dedicated to singing with true sentimentality, and who is passionate about performing live sets for private events, ceremonies, and celebrations across the UK. She is a diverse musician who can perform sets including any of the following genres for your event: Opera, Classical, Crossover, Musical Theatre, Jazz classics, Latin-Spanish-Greek, and Pop/Chart song covers! By booking Avra as the live musician for your event, you will be able to select the perfect program/repertoire that will fit your preferences, choice of mood, and create the ideal atmosphere for you and your guests!

Avra creates a beautiful and sweet sound, lifting the audience. She is also a lovely performer to watch and her band played wonderfully too!

Avra took us on a musical journey of Greek and Spanish dance songs at her concert called “Rhythms of the Mediterranean” - Avra is a very impressive and worthy artist, as well as a person full of passion, charm, and life!