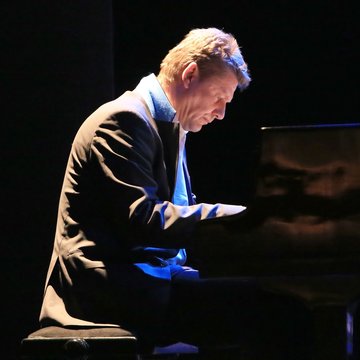 Aurelius Sciuka is a highly professional pianist/keyboard player based in London.
3 of 4 photos
Pianist
London
Public liability insurance of £10 million

Since graduation from Lithuanian Academy of Music and Theatre 1985, Aurelijus Sciuka has worked as a pianist, composer and arranger.  In 2006, he relocated to London, where he has worked as a freelance musician and composer. Performing on British jazz scene Aurelius Sciuka has been influenced by cultures from all over the world. He has collaborated with David Soul, Ernesto Simpson dr.(Richard Bona), Brandon Allen sax, Claude Deppa tr ,Nigel Price g, Linda Lewis, Curiosity Killed the Cat, Eliza Doolittle, Pete Doherty and others. Aurelius has produced a collection of original albums featuring nationally acclaimed artists like singers Neda (Love beginning of sky), Saulė (Suddenly so simple),NAMO, Trip To The Future. He has also worked alongside theatre people and those working in Television. His work has taken him to the Arab States, Oman and China, as well as appearing in jazz festivals in Lithuania, Sweden, UK and Germany.

Jazz Real Book
All the things you are
Beautiful Love
Blue Bossa
Besame Mucho
On Green Dolphin Street
Billies Bounce
Satin Doll
Blue Monk
Beatrice
St. Thomas
Days of Wine and Roses
Freddie The Freeloader
Everything I love
Just Friends
Ladybird
Straight, No Chaser
Solar
Now Is The Time
Tune up
Yardbird Suite
Wave
You Stepped Out Of A Dream
Coming Home Baby
Like Someone In Love
A Night in Tunisia
Oleo
Take the "A" Train
Softly, as in the morning Sunrise
Misty
A Girl From Ipanema
There Will Never Be Another You
Four
Alone Together
All of Me
Invitation
Have you met Miss Jones
There is No Greater Love
Song For My Father
One Note Samba
Body & Soul
How Insensitive
I Love You
Steeple Chase
Customer questions

Im always try our best to be flexible to help ensure your event runs as smoothly as possible. If timings change slightly in the run up to the event just let me know.

Absolutely. This is a really popular request and we actually offer this service for free. If you'd like a DJ service via our PA after the final set until the venue closes, we provide this for an additional £100.”

usually set up about 1 to 1.5 hours before the performance time. As soon as our PA is set up we can provide a free playlist service to help set the atmosphere and get your guests ready for our live performance

Yes, of course - as long as the piano is in working order and in tune, then I'm happy to play on it!”

If a song isn't included in our song list there may still be a chance we already know it. If there is a special song you'd like us to learn we are happy to do this for you. There is a fee of £30 for this service to take into account rehearsal times etc. ”

CR
Camila R
3 years ago, for a Birthday party in Dairsie Rd

Highly recommend Dee&Aurelius duo. They really made our event super special. Would definitely hire them again. Actually, it’s the second time we do.