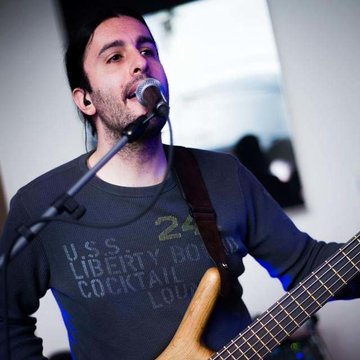 Born on the small but picturesque island of Milos in Greece, his first introduction to music was classical piano. However, it didn’t really make sense to him until he picked up the guitar and began writing his own songs. He reached the bass via a seemingly endless list of instruments he is or was once able to play. He moved to the UK to pursue a Music Technology Masters degree and find a fertile environment for his musical ideas. Upon completing his studies, he moved to London where he started his new music journey, played in bands and composed his own music. Since then he has performed in numerous locations, venues and events. His performing experience varies from original acts and covers bands to theatre work . His calm, understated and affable demeanour, in the tradition of some of music’s finest bass players, hides a consummate musician.

I’ll just say here a huge thank you to Antonis Mikelis (“Adonis” 😂) for depping for us in Large Portion last night. Top bloke, top player and highly recommended for dep if you need one.

Big thanks to Antonis for ace depping!

Bass Guitarists in the UK