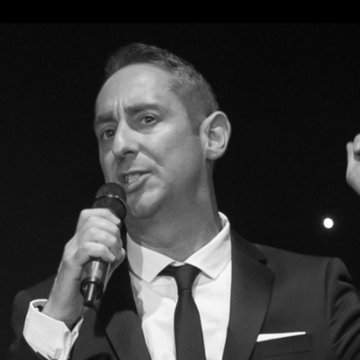 Andy Bayley is a professional singer covering original songs from legends such as Frank Sinatra, Dean Martin, Michael Bublé, Bobby Darin, Nat King Cole and many more. With his dedicated Rat Pack & Swing style, Andy will liven up any event and has been successfully performing at weddings, functions and corporate events for many years as well as appearing at premiership sporting events and on TV. In 2015/16, Andy completed a successful residency at the prestigious Chester Grosvenor Hotel and performed the unforgettable Rat Pack classics in a sell-out theatre show. He is currently in his 4th year as resident for Chester Racecourse, performing for all of their meetings for 2018 Andy’s clients have often commented on his authentic sound and how much like the original recordings Andy’s performance is. His vocal style is perfectly suited to the swing and Rat Pack sound and he has carefully honed his performance over the last decade. The songs he sings are all classics and are easily recognised and enjoyed by young and old alike.

TYPICAL SET LIST
Andy has an extensive song list. A typical set would include the following tracks:
• Mack the Knife
• That’s Amoré
• Lady is a Tramp
• Bad, Bad Leroy Brown
• When You’re Smiling
• Beyond the Sea
• Can’t Take My Eyes Off You
• Under My Skin
• The Way You Look Tonight
• Nice & Easy
• Mr Bojangles
• Come Fly with Me
• L.O.V.E
• Ain’t That a Kick in the Head
• That’s Life
**Lots of Christmas crooning hits also available*

Standard Prices
All prices include:PA, Full Consultation, Insurance
Packages
With 8-piece band
Andy performs cassic Sinatra, Buble Dean Martin etc with an amazing 8-piece swing band
£1000
With full 15-piece big band
Ultimate 'Swing with Sinatra' Big Band experience!
£1880
NEW!Virtual services
Personalised Music Message
Book me to create a unique music video for you to send to a friend as a gift. This could be a birthday message, first dance song for a wedding anniversary, or just your friend's favourite song to cheer them up.
£15
Andy

Andy did communicate really well with myself in the run up to the evening, he arrived spot on the time he told me, very professional performance, everybody loved the performance so Andy contributed to a thouroughly enjoyable evening.

Andy was brilliant and we enjoyed his singing very much and so did our residents.

Andy was brilliant. He had the perfect relaxed style whilst being totally professional .He was very pleasant and even agreed to one of our guests duetting with him! Thanks a lot we would not hesitate to recommend him!!

A
[email protected]
4 years ago

Andy made my mum's birthday party a brilliant success. His singing and choice of music was fantastic and just right for the party. Everyone who attended has been in touch to say how much they enjoyed his singing, which made for a great atmosphere. It was a brilliant evening. Thank you Andy for making the party such a success!

Thank you Andy for another brilliant performance at the Cheshire Line Tavern. Your songs are classics and you deliver an authentic performance.