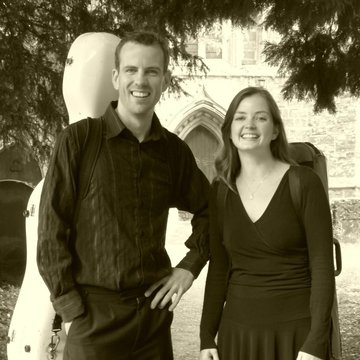 Check availability and get a free quote now - no commitment to book
About
Song list
Questions (7)
Home page
Amalia Strings
Like Amalia Strings?

Vicky is active as both an orchestral player and soloist. She has played at a number of the top venues across the country, including The Royal Albert Hall, Birmingham Symphony Hall and The Royal Festival Hall. Vicky studied Music and English Literature at the University of Sheffield, gaining a First Class Degree as well as winning awards for her recitals, before going on to complete a Masters in Music at Royal Holloway, University of London. She now combines her playing work with a career in the Events Industry. Following two and a half years at the London Symphony Orchestra’s music education centre, LSO St Luke’s and two years at the Natural History Museum, Vicky is currently the Development Events Manager for the London Philharmonic Orchestra. David studied viola and saxophone at the Royal College of Music, graduating in 2009 with a first class honours degree. During his time at the Royal College, David led the viola section of the RCM Symphony Orchestra and subsequently has worked with The John Wilson Orchestra, Brandenberg Sinfonia, London Chamber Strings, London Musical Arts Orchestra, Oxford Philomusica and the Senesino Players, as well as regular work with the Chamber Orchestra of London performing for films and TV including features such as Downton Abbey and Planet Earth. As a founder member of the Piatti Quartet, David performed regularly throughout the UK and abroad from 2005-2016, including appearances at prestigious venues such as The Wigmore Hall and the Purcell Room, and has been featured on BBC Radio 3’s ‘In Tune’ programme several times. Alison attended the Purcell School of Music and Junior Academy as a pupil of Brian Underwood. She went on to study at The Royal Academy of Music and later Musikhochschule Lübeck, Germany. Alison performed at the Wieniawski Festival in Poland and recorded the violin solo with live electronics in Edwin Roxburgh’s Saturn for NMC. She took part in the critically acclaimed production of Britten’s Death in Venice for the 2007 Aldeburgh Festival, and joined the Rock meets Classic 2012 tour with Ian Gillan. She was a member of Orquestra do Norte in Portugal for 5 years, with which she performed as soloist Prokofiev’s 1st Concerto. Other concertos performed with more local groups have included the works of Sibelius, Elgar, Mozart, Glazunov, Beethoven, Walton and Mendelssohn. As a freelance player, Alison has participated in the Vault Festival at Waterloo with the Pythagoras Ensemble, the Multistory Orchestra in Peckham, Bournemouth Symphony and Ulster Orchestras. Alison is in demand as a teacher and combines teaching the violin with performing. One of the founding members of Amalia Strings, Mike enjoys a varied career as a soloist, chamber musician and teacher as well as playing for many orchestras across the UK and abroad including the London Philharmonic Orchestra and European Union Chamber Orchestra. As a soloist he has performed the Elgar, Dvorak, Shostakovich and Brahms Double Concertos with orchestras including the St Albans Symphony Orchestra, the Hertfordshire Philharmonia, Cyprus Sinfonia and the Kingston Philharmonic. After studying music at Royal Holloway, University of London, Mike went on to study at the Royal College of Music, where he was a finalist in the RCM Concerto Competition. Mike has performed in most of the major London venues including The Royal Festival Hall, The Royal Albert Hall, The Barbican and The Wigmore Hall.

We can perform as a string duo, trio or quartet.

We will always do our best to accommodate any changes which may occur and be flexible wherever possible.

We can be set up and ready to play within 5 minutes, however we will always arrive at least 30 minutes prior to our start time.

We have a wide variety of pieces available and are always happy to help you select the works best suited to your event. We are also able to source or arrange specific works, subject to a fee.

We will bring all instruments, music stands and music - we just need chairs to sit on!

We can absolutely look at the suitability of sourcing or arranging a specific work for your event. Just get in touch and we'll see what we can do!