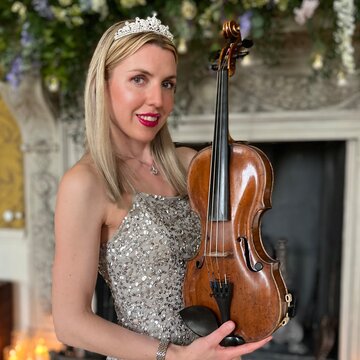 My experience as an orchestral musician started when I was 14 years old, in a great Symphony Orchestra of my native town Chernigiv, as a member of the 1st violin section. I was lucky to play on stage with numerous soloists, instrumentalists, vocalists and conductors. I have performed with the following pianists-M. Lugansky, M. Suk, O.Polyansky, B.Berezovsky, violinists-M.Lackirovich, A.Bazhenov, E. Shuhmann, S.Syodgi, O.Semchuk, cellists-O.Knyazev, I. Kucher, conductors- M. Suckach, V.Sirenko, D. Andre, G. Stelutto, M. Takaya and others. Besides playing solo violin, I have acquired a knowledge of being an orchestral musician, by playing outstanding masterpieces of famous composers. I studied in Glier College of Music and was a concertmaster of a students' symphony orchestra. Despite the early start of exploring the world of symphonic music I have performed solo concerts in Ukraine, performed in string quartets, piano trios and as a duo. Upon entering Tchaikovsky National Musical Academy of Ukraine, in 2003, I became a member of the well-known National Philharmonic Orchestra of Ukraine under the baton of M. Dyaduyra. From my experience playing in orchestras I have developed a large repertoire and excellent sight reading skills. In various Kiev Orchestras I have performed with some legends of Classical music such as-L.Pavarotti, M. Caballe, N. Gutman, K. Penderetzki, P. Godar, V. Kraynev, L. Isakadze and others. Whilst studying in Kiev I actively took part in numerous projects. I was a participant in the Festivals of Contemporary Music where we played masterpieces of Ukrainian composers and also the Summer Musical Academy in Kiev where we accompanied young musicians. As a student I was honoured to be a leader of Tchaikovsky Musical Academy Orchestra conducted by Roman Kofman. Additionally, I was involved in music festivals and concerts in Germany, France, Spain, Japan, Kuwait, Italy, Austria and Turkey. Furthermore, I played with Kamerata chamber orchestra, New Era Orchestra and Collegium Kiev during my senior years at Musical Academy. Since 2008 I have worked as a 1st violin onboard Cunard Line Ships such as Queen Mary 2. Also I had my own show as a quest entertainer on PnO cruises and Fred Olsen. I have an extensive experience in teaching violin as well as being a performer. I have full British residency and meet all the requirements in English language. Also I have a Bachelors degree with Honours from Glier Kiev National Higher Colledge of Music a Master of Music diploma from Tchaikovsky Musical Academy. Thank you for your time and consideration.

My line-up is as follows: Violin with an electric violin option, violinist with backing tracks and PA Violin and piano duo

Yes, I can learn any pieces you require for the event

Versatility and the ability to perform up to a top standard. Improvisation skills, stage presence, punctuality.

Best world concert halls in Europe, Japan, Middle East as a member and a concertmaster of an orchestra. Cruise ships, Weddings, Night clubs

Alleksandra was absolutely fantastic. Beautiful music, and very organised and professional on the day. We would highly recommend!

Thank you soooo much for yesterday! AMAZING! ❤️ I am so glad we chose you, you were awesome!!! Thanks again!

Verified
Steven A, 1 year ago

Alleksandra is a highly competant, versatile and talented musician who is reliable and hard working. She always goes the extra mile to please her audience and client.

Alleksandra is the best violinist around. She is a virtuoso in improvisation as well. She is a highly accomplished electronic violinist when performing with a dj.

Alleksandra performed at my daughter's wedding. I could not reccomend anyone more highly! She is a really amazing violinist and a very warm and friendly person as well.

Verified
Peter A, 2 years ago

Aleksandra played for my birthday party . She is an exceptional performer and brings a lot of energy to the stage. Highly recommended

Alleksandra and her husband performed at my Christmas Party last year. Highly reccommended. They are both amazing! They can play almost anything you ask for!