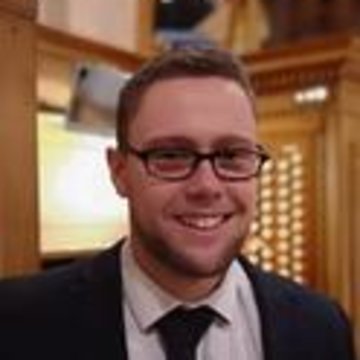 Alexander Goodwin is currently Assistant Organist and Director of the Girl Choristers at Christchurch Cathedral, New Zealand. Prior to arriving in New Zealand, Alex concurrently held the positions of Director of Music at St Saviour’s Church, Pimlico and Assistant Director of Performing Arts & Organist at St John’s School, Leatherhead. Alex was born in 1992 and studied Organ, Piano and Voice at the Royal College of Music Junior Department before winning a sixth-form music scholarship to Wellington College. Following a gap-year as organ scholar at Chichester Cathedral, Alex was awarded an organ scholarship to Worcester College whilst studying for a Music degree at Oxford University. After graduation Alex held the posts of Assistant Organist to Ely Cathedral Girls’ Choir and at Selwyn College, Cambridge, both under the direction of Sarah MacDonald. He has performed extensively with these choirs as both an organist and conductor in venues across the UK and Europe. As an organ soloist Alex has given recitals at venues including Westminster Abbey, St Paul’s Cathedral (London), St Mary’s Marylebone, St George’s Hannover Square, various Oxbridge chapels and as part of the Buxton Music Festival. He has broadcast live on BBC Radio 3 & 4 and appears on a number of CD recordings as both a soloist and accompanist.