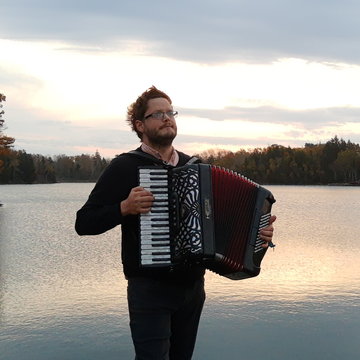 Alex Cumming is a traditional Singer, Accordionist, Pianist and dance caller hailing from Somerset, England, now living in Greater Boston, MA, USA. He performs songs and tunes from around the United Kingdom and America with a great depth of knowledge of the tradition. Alex has made his mark on the folk scene with his rhythmic dance-able accordion style, strong voice and his fun and engaging stage presence. Along with solo performances and calling work, Alex is a member of award winning a Capella quartet The Teacups, Fiddle and Accordion duo Alex Cumming & Nicola Beazley, transatlantic trio Bellwether and various dance bands including Reelation, The Four Idiots, Trip The Light Fantastic and The Alex Cumming Dance Band. ​ As well as performing live, Alex has starred in prime time TV shows including BBCs Edwardian Farm and played live sessions for BBC Radio. In 2014, Alex obtained a BMus Hons. in Folk & Traditional Music from Newcastle University, the only degree program of its type in England. Alex is also an experienced teacher and workshop leader. He has run group workshops in Dance, song and music for many schools and some of the top folk festivals and organizations including CDSS (Country Dance and Song Society of America), Sidmouth Folk Week, EFDSS (English Folk Dance and Song Society), Towersey Festival, Folk Arts Center of New England and Folk South West. Alex is co-founder of Virtual Accordion Camp along with Rachel Bell and Jeremiah McLane, and is currently Program Director for CDSS English Dance Week at Pinewoods. Alex was also Music and Choir Director for Unitarian Universalist Church of Medford from 2017 to 2020. "Stunning musician, fun and inspiring teacher" - Anna Patton (Elixir) "Cumming’s accordion gives it a real sense of warmth" - Bright Young Folk "Alex has a great stage presence and captivates his audience with his charming personality" - Brownington Ceilidh Club "grossly unremarkable" - Alex's Rheumatologist after an MRI

Yes, there is an add on for a DJ service. Can be negotiable.

My set list is flexible and I am able to take a couple of requests without an extra charge. If I know the songs already then of course we can add them, if I need to arrange a piece new to myself then there may be an additional charge. Lets talk.

My set list is flexible and I am able to take a couple of requests without an extra charge. If I know the songs already then of course we can add them, if I need to arrange a piece new to myself then there may be an additional charge. Lets talk.

Standard Prices
All prices include:Relevant sound equipment for live or online performance for top quality audio.
NEW!Virtual services
Personalised Music Message
Book me to create a unique music video for you to send to a friend as a gift. This could be a birthday message, first dance song for a wedding anniversary, or just your friend's favourite song to cheer them up.
£15
Bespoke music video
I'll produce a unique folk music video of with professional recording equipment. I can customise the video with your own branding and lyrics! Requests taken. Lets chat!
£70
Zoom bomb
I'll jump into your Zoom call and surprise your friends and colleagues with a unique song on everyone's favourite instrument, the Accordion!
£50
1hr Virtual Ceilidh!
Want a ceilidh or barndance but can't because of social distancing? Well never fear, I have perfected the 'Zoom Ceilidh'. As a professional caller and dance musician I will guide you through fun dances that can be adapted to any situation and any number of people. And much like a regular ceilidh this is suitable for all ages and abilities. I will provide the calling as well as live music from my home studio straight to your Zoom (or similar).
£150
30min Kids Show
With many years experience of music with children at folk festivals around the UK and US, plus also having my own cute little ones, I can provide a fun a captivating half hour of songs for everyone to sing, dance and play along too. I am able to broadcast live from my studio (complete with green screen for extra fun) straight into your Zoom meeting, Facebook group or many other platforms.
£100

Alan was just fantastic singing and playing for ten children and their parents. He was warm, engaging and fun. The kids loved it. He sang 3 year old favorites and had the children dancing and spinning by the end. I would highly recommend Alex! 5 Star Rating https://www.gigsalad.com/alex_cumming_medford/review/185227

Alex was fanatic He showed up on time, was professional, funny and extremely talented..made our St Patty's day celebration a lot of fun. Highly recommend. https://www.gigsalad.com/alex_cumming_medford/review/182188