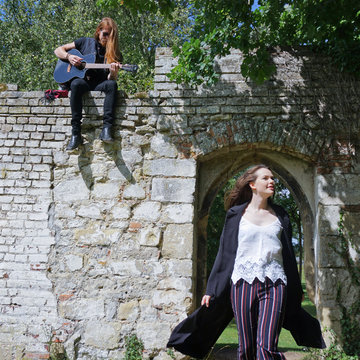 About Across The Sea

Once upon a time, a choir girl and a metalhead got stuck on an island, with nothing but a microphone, a guitar, and a pedalboard… Across The Sea sound unlike any act you’ve heard before. Built around the hauntingly powerful voice of Hannah Katy Lewis and the unorthodox, adventurous guitar approach of Pete Ferguson, their unique genre-bending sound is wildly eclectic, fiercely inventive and singularly distinctive. Their debut album Infinite Worlds (released December 2018) featured on HMV Brighton's recommended list and has received airplay in the UK and internationally. The duo have appeared extensively at venues throughout the south, earning a reputation as a captivating and affecting live act and performing aboard HMS Warrior, at festivals such as Victorious, Wickham and Rhythmtree, and to a capacity hometown crowd at Worthing Pier’s Southern Pavilion.

Genuinely arresting, Across The Sea's compositions and performance live are utterly transfixing.

These guys are outstanding and highly recommended.