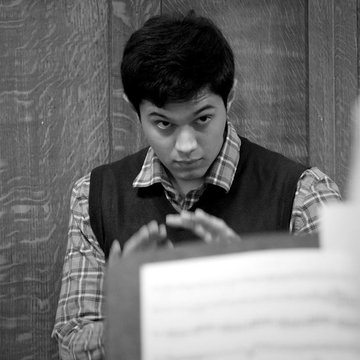 Check availability and get a free quote now - no commitment to book
From£180
About Aaron
Reviews
Home page
Aaron King
Like Aaron?
Watch & Listen

Aaron is a composer, conductor and multi-instrumentalist studying music at the University of Oxford
Composer
Tewkesbury

Aaron King is a composer, conductor and performer based in Tewkesbury, He is currently in his second year of reading music student at Hertford College, Oxford. He studies conducting with John Traill and has also taken masterclasses with Ralph Allwood and John Traill. He currently conducts the Oxford University String Ensemble, one of the universities premier ensembles, as well as the Hertford College Chapel Choir, which in addition to singing weekly services regularly performs with orchestra and undertakes tours abroad. He also acted as Assistant Music Director for a recent Oxford student production of ‘Spring awakening’ and more recently conducted a performance of Bach’s oboe and violin concerto. Prior to coming to Oxford he conducted a variety of choral and instrumental student groups and the choir of Malvern Priory. As a composer he recently scored the short film 'What price solitude' by Skytail productions, and his works have been performed around Oxford as well as in his home are of Malvern. As a keen solo performer on the piano and flute he has given recitals in Oxford and Cheltenham as well as several concerto performances in Malvern. He has also sung as the tenor soloist in a performance of Mozart’s Requiem by the Birmingham Phoenix Singers, recently took the lead role in the new musical ‘This World Lousy’ by Peter Shepherd, and is due to sing the tenor solo part for Stravinsky’s Pulcinella with the Oxford University Symphonietta. He has sung with the choir of Merton College, the Rodolfus Choir, The Armonico Consort, with the CBSO Youth Chorus at the BBC Proms and with the Tewkesbury Abbey Schola cantorum. He studies piano with Jonathan Darnborough and composition with Toby Young. He is currently working on music for upcoming Chess themed musical, 'Pawn', due to debut at the Edinburgh fringe festival, and is due to write a score for independent short film 'Little White House' from Skytail production this summer.

The score not only complemented the scenes but added something new... no genre is beyond him'