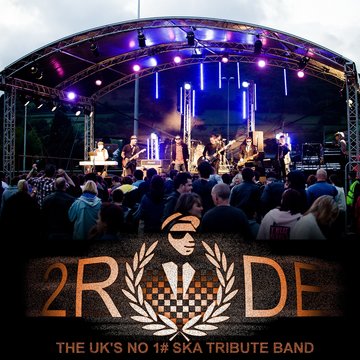 Line up: 7 Piece Band: Lead Vocal, Bass guitar (vc), Lead guitar, (vc), Keyboard, Trumpet / Trombone (vc), Saxophone (vc), & Drums. Highlights * One of the hottest live Ska bands in the country! * Repertoire includes music from Madness, The Specials, Toots & The Maytals & more! * Previous experience includes playing & collaborating with Roddy Radiation of The Specials & sharing the stage with 2 Tone legends The Selecter and Bad Manners! For most ska fans 1980 had to be the year. The music of The Specials along with Madness, The Beat, The Selecter and Bad Manners were the sounds on your radio. Britain was a bleak place back then, and the music that brightened those days were sounds of the great 2 Tone bands. It didn’t matter who you were or where you came from, it was a movement that united people and it continues to this day! Every generation a band comes along, a band that makes you forget about all that is wrong with world, a band that makes you stand up and throw your hands in the air. They have been bringing their unique blend of 2 tone ska hits to the masses since 2009. This gathering brought together a crew of 7 first class musicians with a calibre that is second to none, and a combined number of gigs literally in the thousands. The band have played and collaborated with the likes of Roddy Radiation of The Specials, and have shared a stage with 2 Tone legends The Selecter and Bad Manners! Since the band have been touring the country playing their unique style of two toned inspired hits, they have played a string of sell out shows, headlined a string of festivals and have left thousands of people breathless and shouting for more. 2 Rude have rightly claimed their title as one of the hottest live acts in the country! 2RUDE Set List / Repertoire Madness Baggy Trousers Bed and Breakfast Man Cardiac Arrest Embarrassment Grey Day House of Fun It Must Be Love Land of Hope and Glory Madness Michael Caine My Girl Night Boat to Cairo One Step Beyond Our House Rockin' in A Flat Return of the Los Palmas 7 Shut Up Swan Lake Taller Than You Are The Prince The Sun and The Rain Tomorrow's Just Another Day The Beat Can't Get Used to Losing You Hands Off She's Mine Mirror In The Bathroom Tears of a Clown Too Nice To Talk To Rankin' Full Stop Twist & Crawl The Specials (Dawning of a) New Era Do Nothing Enjoy Yourself Friday Night, Saturday Morning Gangsters Guns of Navarone Hey Little Rich Girl Ghost Town Little Bitch Message To You Rudi Monkey Man Nite Klub Rat Race Skinhead Symphony Stupid Marriage Too Much Too Young You're Wondering Now Bad Manners Can Can Can't Take My Eyes Off You Inner London Violence Lip Up Fatty My Girl Lollipop Skinhead Girl Special Brew Sally Brown This Is Ska Walking In The Sunshine Woolly Bully Toots & The Maytals Funky Kingston Pressure Drop Pig Bag Papa's Got a Brand New Pigbag The Locomotive Rudi's In Love Dexy's Midnight Runners Geno Dead 60's Ghost Face Killer Giuliano Palma & The Bluebeaters Poison Ivy Wonderful Life The Pogues Fiesta 10CC Dreadlock Holiday The Selecter Too Much Pressure

If I closed my eyes [while onstage] it would feel exactly like I was playing with The Specials.

We always had the music of Madness, The Specials, The Beat and Bad Manners playing in our house in the early 80s, but I was too young to see these bands first time around. After watching 2 RUDE play all their hits under one roof, I thought “I’m booking this band for my 40th Birthday party!” Not only did we get classic 2-Tone and original ska, they even provided party crowd-pleasers from Teardrop Explodes, The Pogues and Tenpole Tudor. My absolute highlight was that they learned The Pretenders’ ‘Brass in Pocket’, just so I could realise my childhood dream of being a rock star. For one night only, I was pop goddess Chrissie Hynde (…in my mind, if not the audience’s!). Unlike me they sounded superb, were complete professionals, knew how to work a party and won over loads of new fans from my friends and family in the crowd. 2 Rude. Two-Tone-Tastic!