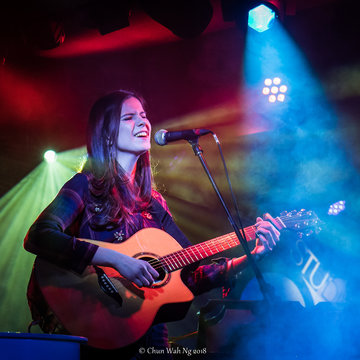 Acoustic singer-songwriter and choral singer, based in Cambridge and London, with a wide repertoire of covers for functions and events

Zoё Wren's 'smooth yet striking' voice and accomplished guitar skills have won her shows from The Shard to 100 Wardour Street to Cambridge Folk Festival, as well as BBC Radio 2 airplay. With a huge repertoire from folk to jazz to pop, Zoё is experienced at captivating crowds with a memorable show. She has performed professionally as a singer-songwriter, session musician and official London Underground Busker for over four years, and has won multiple awards including a PRS Foundation Lynsey de Paul Prize and an NMG Artist Development Prize, and was named Laurel Canyon UK's Favourite New Artist 2018. In order to provide the best possible musical experience, Zoё will always tailor her setlist to the occasion, taking into account client preferences in genres and artists, and accommodating specific song requests if made sufficiently in advance. Previous clients: View from The Shard, 100 Wardour Street, TfL - London Transport Museum, Icon at the O2, The Comedy Store, Cambridge Folk Festival, Glasgow Celtic Connections, Fatea Festival, Caffe Nero Brighton, Beatnik Events, Commonwealth Orchestra Choral singer: During her time studying Music at Cambridge University, Zoe was a choral scholar in the Choir of Christ's College and a member of the Cambridge University Chamber Choir. She is also an alumnus of the National Youth Choir of Great Britain and London-based Rodolfus choir. As well as singing in large-scale choral works at venues such as the Queen Elizabeth Hall, the Royal Albert Hall (as part of the Proms) and Snape Maltings, she has enjoyed performing with smaller ensembles; at university she sang with early music ensembles Quinto and Magdalena, as well as Novaura, a choir specialising in new compositions. She is currently part of London choir Epiphoni, and freelances as a choral dep, as well regularly singing for the Commonwealth Orchestra's chamber choir, recently recording at Abbey Road Studios alongside Mica Paris.

Standard Prices
All prices include:Small amp setup (unless larger PA provided by venue), skype consultation if required, and up to 3 song requests

Zoe sang with my semi chorus and Amateur Choir at my concert December 2015. She has a very good Alto voice, knew the repertoire and blended in with my choristers. It was a pleasure to have Zoe help us out.