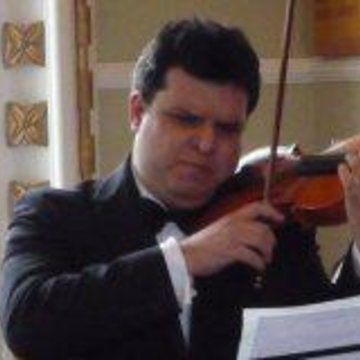 Vlad is a violinist, conductor, composer and music journalist.

Born in 1980, Vlad started music theory lessons at the age of 2 years and 3 months. At just before 5 years old, he started studying at the George Enescu Music High School, and, at 9, he was a guest of the London Symphony Orchestra in London. After studies at the Rome Santa Cecilia Conservatoire and at London's Purcell School of Music, he obtained his Bachelor of Music degree from the Royal Academy of Music in London. He participated in Masterclasses with Zakhar Bron, Ruggiero Ricci, Maurice Hasson and many others, won 2nd prize in the RAM Beethoven Violin Concerto Competition and played chamber music with, amongst others Chiao-Ying Chang, Alice Demske Hansen and Catherine Dubois. From 1997 to 2000 he was a first violin member of the European Union Youth Orchestra (and co-leader in 2000), where he played under the batons of Bernard Haitink, Vladimir Ashkenazy and Sir Colin Davis, amongst others. In other orchestras, he led under Kurt Masur, Ilan Volkov, Edward Gardner and others. He was Assistant Conductor for Opera Holland Park for their production of La Traviata with Anne-Sophie Duprels in the title role, and his co-composition "Variations on Notations by Pierre Boulez" was played at the Barbican Hall in the presence of M. Boulez. He remains active as a violinist, conductor, composer, violin and music theory teacher and music journalist.

nine-year-old virtuoso pianist and violinist Vlad Bourceanu ... is regarded in his own country as a musical prodigy of quite exceptional gifts