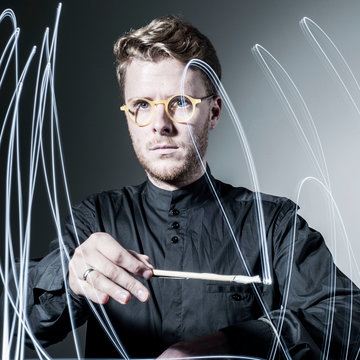 Toby Thatcher was raised in Sydney, Australia, and studied at the Sydney Conservatorium of Music, before completing his postgraduate studies at the Royal Academy of Music, London. He studied with Philharmonia Principal Oboe Chris Cowie and Philharmonia Principal Cor Anglais Jill Crowther. During this time Toby participated in several international conducting and oboe masterclasses, studying with pedagogues such as Neeme and Paavo Jarvi, Johannes Schlaefli, Leonid Grin, Nicolas Pasquet, Francais Leleux, Jonathan Kelly, Diana Doherty and Jacques Tys. Immediately following his graduation Toby was invited as one of 12 young conductors out of 120 applicants to audition for the Assistant Conductor position with the Bournemouth Symphony Orchestra, a process in which he was placed in the final four. In February 2015 he was awarded 3rd Place at the Georg Solti International Conducting Competition with the HR-Sinfonieorchester and Frankfurter Opern und Museumsorchester, performing Strauss and Dvorak in the final at the Alte Oper Frankfurt. Toby also reached the shortlisted stage for the Malko International Conducting Competition in the same year. In January 2015 was invited to apply for the position of Assistant Conductor with the Sydney Symphony Orchestra. In 2014 Toby was offered a trial with the Royal Philharmonic Orchestra for the position of Principal Cor Anglais, and placed on the extra list for the Philharmonia Orchestra. In 2013 Toby performed with the London Sinfonietta at the Royal Festival Hall. Between 2012-13 Toby was a principal player of the Australian Youth Orchestra, taking part in their European tour led by Christoph Eschenbach and Joshua Bell. This afforded Toby the opportunity for Toby to perform is some of Europe’s leading concert halls, including the Amsterdam Concertgebouw and the Berlin Konzerthaus. At the age of 19 Toby was chosen as one of a handful of young conductors to participate in the Symphony Australia Young Conductor Development Programme. This allowed him to work with the Adelaide Symphony Orchestra, Auckland Philharmonic and Tasmanian Symphony Orchestra over a period of two years. Toby is the founder and director of London-based chamber orchestra Ensemble Eroica, and also guest conductor of contemporary music group Ensemble x.y.

Conductors in the UK