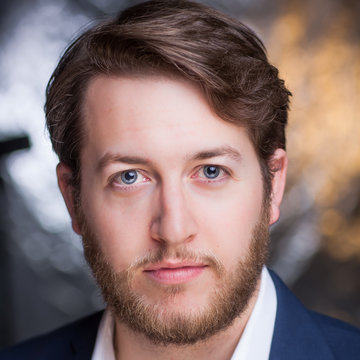 A Baritone, Matthew studied with Robert Dean at the Guildhall School of Music & Drama and is building a reputation as an exciting performer.

Matthew Palmer studies at the Guildhall School of Music & Drama under Robert Dean and is on the second year of the Opera Course. He has sung live on BBC Radio 3's In Tune and made his European debut as Guglielmo Così fan tutte at the Brigitta Festival, Estonia in 2016. Between graduating from the masters course in 2016 and returning to the school in 2018, Matthew worked for Opera North, Garsington Opera, Grange Park Opera, Glyndebourne Education and sang Marcello La Bohème in the Olivier Award nominated production at Trafalgar Studios, London. Other highlights during that time include baritone soloist for Opera North Children’s Choir; Ned Keene Peter Grimes (Dartington Festival) under Sian Edwards; Fiorello and cover Figaro The Barber of Seville (Iford Arts and Charles Court Opera); Captain Corcoran HMS Pinafore (Charles Court Opera); The Mikado & Pish-Tush The Mikado (Charles Court Opera); Guglielmo Così fan tutte (Devon Opera); Escamillo Carmen (Heritage Opera); Conte Robinson Il Matrimonio Segreto (Pop-Up Opera); Mr Ford Merry Wives of Windsor (Duchy Opera).   At the Guildhall Matthew has sung Perrucchetto La fedeltà premiata; Starveling A Midsummer Night’s Dream; Adonis Venus and Adonis; and Joseph Grace (première), as part of Guildhall Opera Makers. He will sing Observer 4 The Age of Esmeralda, a world première in association with Scottish Opera. On completing the course Matthew will be joining Garsington Opera as an Alvarez Young Artist, where he will cover La Rocca Un giorno di Regno as well as sing in the chorus for Fidelio, Un giorno di Regno and Rusalka. He also looks forward to continuing his association with the Opera Dots programme at the Royal Opera House, where he has been the baritone workshop leader in a number of immersive workshops.

Matthew was booked along with another singer to perform at my event, not only was his performance outstanding, he was professional, charming and an overall lovely person, my family and I were blown away by his amazing voice and personality - I highly recommend. Thank you Matthew so very much, Helen x

Matthew was a pleasure to work with. His singing was brilliant, and his correspondence was very professional and punctual. I would be delighted to work with Matthew again in the future.

But the dazzling find was Matthew Palmer’s lean and hungry Marullo: a truly arresting voice, rich-toned, and with an extra deep range.

Watch out for young newcomer Matthew Palmer: his fine voice is destined for great things.

Singer (baritone)s in the UK