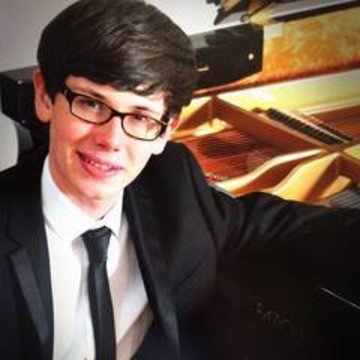 Martin James Bartlett is a young British concert pianist, winner of BBC Young Musician 2014. He is a regular guest on BBC radio and TV.
3 of 12 photos
Pianist
London

This past May, at the age of 17, Martin James Bartlett was awarded the title of BBC Young Musician 2014. His winning performance of Rachmaninov’s Rhapsody on a Theme of Paganini, with conductor Kirill Karabits and the BBC Scottish Symphony Orchestra, received overwhelming acclaim from Edinburgh’s Usher Hall audience and from those tuning into the live recording broadcast on BBC4 and BBC Radio 3. Martin began his piano studies with Emily Jeffrey at the Royal College of Music Junior Department when he was 8 years of age, and then at the Purcell School also some 5 years later. This autumn, he commenced his undergraduate studies with Vanessa Latarche at the Royal College of Music, notably as a coveted Foundation Scholar. Martin also previously studied the bassoon and the recorder, achieving Grade 8 Distinction on all three instruments by the age of 12. Throughout these formative years, Martin enjoyed considerable success in numerous competitions and festivals. During his time at the Royal College of Music Junior Department, Martin won the Gordon Turner Competition, the Teresa Carreño Competition, the Angela Bull Competition and the Peter Morrison Concerto Prize. He was several years running a top prize winner also in the Jaques Samuel Junior Department Piano Festival. In 2012, Martin was granted a Tsukanov Scholarship, which generously supported his final years of study at the RCMJD. During his time at the Purcell School, Martin won the Middle School Concerto Competition, the Freddy Morgan Competition, the Wigmore Competition (both solo and chamber) and the Senior School Concerto Competition. At the end of his studies at both RCMJD and Purcell, Martin was honoured to be awarded the prestigious Leaver’s Prize for Outstanding Musical Contribution, the Esther Coleman Prize and the Rosemary Rapaport Prize. Following his success in such competitions, Martin has given solo recital performances in the Purcell Room, Wigmore Hall, St. John’s Smith Square, Bolivar Hall and Novi Sad Town Hall, as well as the Royal Albert Hall’s Elgar Room, Steinway Hall and Moscow’s Multi-Media Arts Hall. He has also participated in masterclasses with Lang Lang, Stephen Kovacevich, Mikhail Petukhov, Kathryn Stott, Aaron Shorr and Alberto Portugheis. In addition, Martin has organised and performed in numerous charity concerts too, to date raising over thirty thousand pounds for a wide range of deserving causes. Just this past September, Martin made his debut at the BBC Proms, performing Gershwin’s Rhapsody in Blue with the Ulster Orchestra at the “Last Night” celebrations, which were broadcast live from Belfast on the internet as well as BBC Radio Ulster. Martin has also very recently performed with the BSO in Bournemouth Pavilion as soloist in the opening concert of their 2014/15 Season. Most recently, Martin was one of 27 international artists, including Elton John, Stevie Wonder, Nicola Benedetti and Alison Balsom, to be chosen by the BBC to record a cover of the Beach Boys classic ‘God only Knows‘. The song was first aired on the 8th October on all BBC TV and Radio channels and later was released as the BBC Children in Need single with the first ever collaboration between Warner, Sony and Universal music.