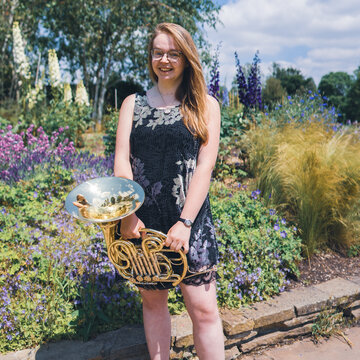 Originally from Cornwall, Lynn Henderson is currently studying for an MA at the Royal Academy of Music. She graduated with a 1st from Royal Welsh College of Music and Drama in July 2019, earning the Principal’s Award and a RWCMD Skills Award. She studied with Tim Thorpe, James Mildred and Anneke Scott. Lynn played principal horn with all of the major ensembles at the Welsh College, as well as winning places on the BBC National Orchestra of Wales and Welsh National Opera Placement Schemes in her final year. She won several prizes for chamber music and was runner up in the Linda Mowat Solo Brass Prize in 2018. Highlights of Lynn’s time in Cardiff include being awarded a first for her final recital, which consisted entirely of music by female composers and performing with the BBC National Orchestra of Wales at the Welsh Proms in 2019. In addition to her studies, Lynn has performed with the Britten-Pears Young Artists Orchestra, the St Endellion Festival Orchestra, the Chipping Campden Festival Orchestra, the Young Musicians’ Symphony Orchestra and the London Sinfonietta Academy. November 2018 saw her playing guest principal horn with the Symphony Orchestra of Sri Lanka in Colombo. She was invited to perform with the Divertimento Ensemble at their 2019 summer residency in Bobbio, Italy, workshopping and premiering pieces by selected young composers. Lynn’s brass quintet, Blackweir Brass, are Making Music Selected Artists and perform regularly for Live Music Now. They won the 2019 June Emerson Launchpad Prize and have been invited to perform as chamber fellows at Aberystwyth Music Festival. Recital venues have included St David’s Cathedral, Newport Cathedral, St Endellion, St David’s Hall and St John Smiths Square. They have also performed as part of RWCMD’s talent showcases at fundraising events and for HRH Prince Charles. Outside of music, Lynn is an avid tennis fan and enjoys surfing, baking and pub quizzes.

Lynn was fantastic! Great performance and very professional. I will definitely be booking her again. Top marks for you Lynn!

Verified
Roger A, 2 years ago

An imaginative, creative opening and very well presented. Staging was excellent, thought through and well prepared. Very well punctuated. Sensitive playing and warm sound. Good contrasts of mood and performance between broad and sustained to spacious and lighter articulation. Plenty of musical personality!