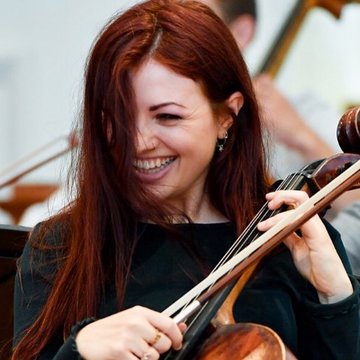 Check availability and get a free quote now - no commitment to book
From£180
About Lydia
Home page
Lydia Emily Dobson
Like Lydia?

Lydia is a freelance cellist based in London.
Cellist
London

Lydia began playing cello at age 4 and was taught by her mother until age 9, when she started at the Primary Department of the Royal Academy of Music. At 11 Lydia recieved a medal for one of the highest marks in England in the year for Grade 8 cello and at age 12 she was awarded both an RAM and ABRSM scholarship to the Junior Department of the Royal Academy of Music and was taught by Lionel Handy. At 14 Lydia began attending the Purcell School for Young Musicians where she studied with Pal Banda. At Purcell she performed multiple times with the Purcell Symphony Orchestra, becoming Principal cello in her final year. Lydia has just graduated with a first class honours degree from the Royal College of Music, where was kindly supported by the Henry Wood Trust and studied with Richard Lester. She has performed in masterclasses with Jo Cole, David Strange, Alexander Baillie and Johannes Goritzki and several ensemble concerts at RCM including a performance of Steve Reich Cello Counterpoint with the Richard Lester cello ensemble. Lydia has a vast orchestral profile and has been Principal cello several times in RCM orchestras. Lydia regularly works with English National Opera, BBC Philharmonic and more recently London Sinfonietta. In Summer of 2017 she became a BBC Classical Introducing Artist and has had recordings played on BBC radio 3 In Tune as well as a live performance and interview on the show. Lydia plays on an early 18th Century French cello.