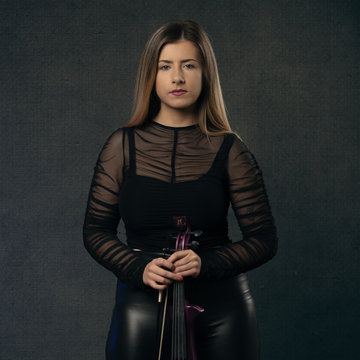 Lara has recorded and performed with artists including; Nile Rodgers, Rudimental, Olly Murs, Ray Quinn (X Factor), Sweet Female Attitude, DJ Spoony, Clare Teal, Gregory Porter, Richard & Adam (Britain’s Got Talent), Circa Waves, ZUZU & many more, in various venues from Abbey Road Studios to The Royal Albert Hall. Lara is a classically trained musician and graduated from Sir Paul McCartney’s ‘Liverpool Institute for Performing Arts’ in 2016. She founded Echo Strings - a string ensemble who perform extensively at events around the UK and appear regularly on Hollyoaks, Channel 4 . She also runs Sapphire String Trio - an electric/acoustic string ensemble who perform on cruise ships. In 2019, they completed a six month contract performing on the Carnival Conquest Cruise Ship in the Caribbean. Lara is a member of critically acclaimed Electric Light Orchestra Tribute Band The ELO Show with whom she has played sold out shows across the UK and toured Europe. She also performs regularly with rock & roll band Ian Prowse & Amsterdam who have most recently supported Elvis Costello on his UK tour. She has performed with orchestras including; Ignition Orchestra, Gatecrasher Orchestra, Leeds Symphony Orchestra, Incredible 11 Hip Hop Orchestra and the Northern Session Collective. In terms of musical theatre productions, Lara has performed in shows including; Keep The Change (Edinburgh Fringe Festival), The Last 5 years (Epstein Theatre), The Silence Between Us (Unity Theatre), Bring On Tomorrow (The Barbican), and many more. Lara has provided the string arrangements for various projects including; The ELO Show, The Incredible 11 Hip Hop Orchestra, The Christians’ album ‘Sings & Strings’, and string arrangements for Carnival and Princess Cruise Lines. As well as offering private music tuition, Lara has also worked as a tutor at Pulse Music Education, Maestro Academy of Music & Aintree School of Music.

I am able to provide music on classical instruments which you wouldn't expect to hear! People tend to love the LED electric violin especially as it brings a new energy to the performances.

I love artists who fuse classical and popular music. I am a classically trained musician but have a passion for modern, pop, commercial styles. Therefore, artists such as Clean Bandit, Bond, Escala, David Garrett, Vanessa May, Lindsay Sterling really inspire me!

I lead an orchestra in Abbey Road Studio 1 conducted by Nile Rodgers, recording a symphonic version of David Bowie's hit 'Let's Dance' for 80's Symphonic project. It was amazing!

I am happy to be flexible in order to help your event runs as smoothly as possible. We can discuss changes in the run up to the event.

Not long - around half an hour! Depending on the line up. Electric with backing tracks will take longer as we will have to get the levels right. Acoustic performances don't take long at all.

Yes you can choose the exact pieces you would like for your event so that you make sure it provides the perfect atmosphere for your special day. You can also request songs that aren't on the set list beforehand for a small extra price.

Yes we provide everything we need.

Yes we can! There is a fee of £20 for us to learn a new song which isn't already on our set list. We love getting new request and adding all of our clients favourites to our repertoire!

Standard Prices
All prices include:All equipment needed on the day, special song choices chosen by you.

Although Lara was unable to do our booking due to unforseen circumstances, she arranged a replacement who was amazing. Thanks Lara you were so professional, warm and reassuring. Amy who was replacement was brilliant.

Lara was amazing. Booked her as a surprise for my eldest daughters birthday event. Every one enjoyed the performance, choice of music was perfect.

Verified
Jakir A, 1 year ago

Thanks for this – and all your hard work. It was beautiful thank you.

Wonderful performance from Sapphire string trio. Created a bubbly and vibrant atmosphere for my 60th Birthday party playing all my favourite classics

“We had so many positive comments about you guys and you really helped to get the day started. People were really impressed by the variety of music that you played. Couldn’t be happier that it was you guys who responded to our advert!”

“Thank you to you and the girls for performing at our wedding. It worked perfectly for the drinks reception and so many people commented on how great you sounded. Thanks for being so accommodating and flexible with everything.”

“Thank you so much for performing at the dinner last night – you were all wonderful – and the piece you played during the meal were very much enjoyed by everyone. Thank you!”

“These girls are a fabulous group to work with! I recently used them for a studio session to record my Debut Single and they we’re amazing, very professional and did a fantastic job!”

“Working with Lara and the girls in Echo String Quartet has been an absolute pleasure. Having contacted LIPA to enquire about availability of students, Lara from Echo String Quartet, was very prompt in responding with video footage and a bio. The Telegraph Cruise & Travel Show was a two day event at the Exhibition Centre Liverpool from 10am-5pm on Saturday and 10-4pm on Sunday. As the only string quartet at the event, it was quite demanding on the girls to play across both days with 1-1.5hrs sessions on a tight schedule. Their performances were fantastic and provided our visitors with a relaxing and intimate atmosphere within our Cream Tea Experience. We have recieved many lovely comments from our visitors since the show, and I would highly recommend Echo String Quartet for any event that requires a classy and sophisticated musical accompaniment.”