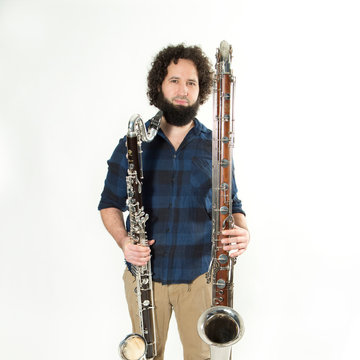 I would recommend Jason

We wanted to email you to say what an amazing time we had at our wedding, you were all incredible and everybody absolutely loved your music. Thanks so much for everything, we had the best day ever and it was really special having you guys playing. A personal highlight for me Zombie, and of course, Man With the Red Face - we have some brilliant videos of that song and it was something that I will never forget! Thanks so much for learning that and Bill Withers' Lovely Day too - we could tell you guys had put a lot of practice into it.

I was a complete novice with the tenor sax and bass clarinet, Jason is an excellent teacher and I am progressing fairly quick, I very much look forward to each lesson, he is a true artist. I am now starting to learn the alto flute with Jason.

Jason is a very good Saxophone teacher. He teaches in a relaxed way which sets the right environment for learning and he has a keen eye for spotting exactly what I am doing wrong and then using examples and easy illustrations to help me to understand my mistakes and correct them with immediate improvements to my sound and feel. Like any good music teacher Jason makes clear what he would like me to practice and learn during the lesson but then he also responds to things that I have learned outside of his lesson structure and gives me advice and instruction on them also. In other words, he is there to help me to learn the things that I want to learn as well as the things he wants to teach me. This gives me the confidence to take charge of my learning and to use the lessons as a springboard to explore the saxophone further on my own, knowing that he is there to support me. The lessons are once a week but we are both flexible with both the date and time which is great for me as I am self-employed. I recommend Jason very highly to anyone who would like to learn the Saxophone with a friendly, relaxed but very highly qualified and knowledgeable teacher who is also an accomplished musician.