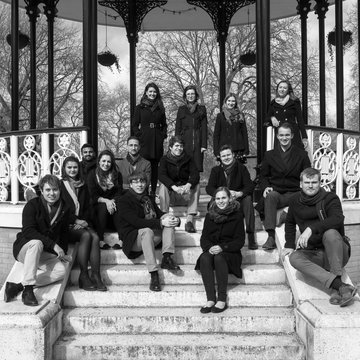 Dynamic London-based chamber choir performing music from the 15th Century to the present day. Shortlisted for Choir of the Year 2016.

Founded in 2014 by graduates from the University of Cambridge, the Godwine Choir has established itself as one of London's most dynamic and versatile chamber choirs. The choir is based in St. George the Martyr, Borough, where they sing Eucharist every fourth Sunday of the month. They give regular concerts at leading London venues as well as further afield, with recent performances in Sherborne Abbey, St Matthew’s Northampton, and Brussels Cathedral. In 2016, the choir was shortlisted for Choir of the Year. Last season’s highlights include the release of the choir's first recording, featuring little-known works by Gustav Holst and George Dyson, on the English Music Records label, as well as a performance in Dorchester Abbey as part of the English Music Festival. The Godwine Choir is available to hire for weddings, services, corporate and charity events. They have previously performed for the English Speaking Union, Minor Metals Trade Association and Bliss among several others.

Congratulations – great job! Thanks so much for your sensitive performance and complete immersion in a new piece.

Choirs in the UK