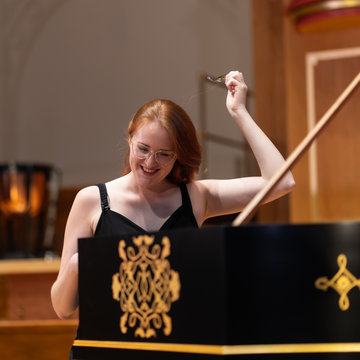 Born in Poland, Dominika Maszczyńska performs on a variety of keyboard instruments including fortepiano and harpsichord as well as modern piano. Having graduated with distinction from The Karol Szymanowski Academy of Music in Katowice (Poland), she came to London to undertake a Masters of performance at The Royal College of Music as a Charles Colt Scholar, studying fortepiano under Geoffrey Govier and harpsichord under Terence Charlston. As both a soloist and continuo player, Dominika has performed with The Royal College of Music Baroque Orchestra, The Polish National Radio Symphony Orchestra, The Academic Baroque Orchestra in Katowice and Zabrze Philharmonic Orchestra. An experienced performer, she has played numerous concerts in different countries across Europe, including Poland, Austria, UK, Italy, and Belgium. Dominika was a semi finalist of the prestigious Musica Antiqua Competition in Bruges (2019) as well as a laureate of VII International Music Competition in Citta’ di Filadelfia (Italy) and XV International Juliusz Zarębski Music Competition (Poland). In 2020, she made recordings for Erddig/National Trust on the original Broadwood square piano and Collard&Collard piano from 1876, as a part of the AHRC project run by Wiebke Thormählen. Her musical personality has been shaped by such pedagogues as Geoffrey Govier, Katarzyna Drogosz, Andrzej Jasiński, Marcin Świątkiewicz. She has been awarded with the Fellowship in Historical Keyboards at the Royal College of Music for the 2020/2021 academic year.