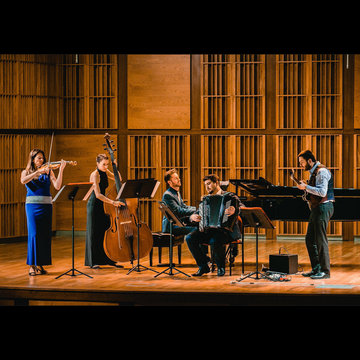 The Deco Ensemble has been praised as an 'exceptional ensemble of the highest calibre with a strong and highly individual voice’.
3 of 8 photos
Spanish folk band
London

Established in 2013, the Deco Ensemble has been praised as an ‘exceptional ensemble of the highest calibre with a strong and highly individual voice’. Their adventurous programming and virtuoso performances display extraordinary breadth and creativity. They re-imagine the sound of Nuevo Tango through an eclectic and colourful combination of classical, jazz and world music infuences. Their repertoire includes works by composers such as Gustavo Beytelmann, Frédéric Devreese, Ramiro Gallo, Astor Piazzolla and Anibal Troilo. They collaborate with many of the world’s most intriguing composers and performers, and write their own arrangements. They released their debut album ‘Encuentro’ in 2015 to critical acclaim, and their second album is set to be released in mid 2017. They have toured extensively across Europe. Highlights from this season included sell-out performances at the Warsaw Philharmonic Hall, the Salle Cortot in Paris, the Palazzo Brancaccio in Rome, the Royal Albert Hall, the Purcell Room, Wigmore Hall, Colton Hall and the European Parliament in Brussels.

One of the UK's foremost tango quintets. Expect fireworks.

The instrumental quintet got things off to a superb start, both looking and sounding sharp and throughout the evening it was the quality of the instrumental contributions which really lifted the performance as Gosalbo and his ensemble brought out the steaminess and intensity of Piazzolla's tango nuevo whilst keep the rhythms crisp and vivid. The Deco Ensemble is a well established tango quintet and certainly worth looking out for.

Ricardo Gosalbo’s orchestra of jazz guitar, strings, tuned and untuned percussion are topped off with Bartosz Glowacki’s masterful accordion playing that serves as a fitting homage to the composer himself.

This group brings together the ideal traits of the creative performer: knowledge of the score, awareness of rules and conventions, and brilliance at their instruments. Long live The Deco Ensemble!

The Deco Ensemble displayed musicianship of the highest calibre in their interpretation of Piazzolla's tango music - they played every note as if their life depended on it, conjuring up the image of the wonderful, alas no more, Club del Vino in Buenos Aires.

An exceptional performance, always interesting and creative. The ensemble plays with a strong and highly individual voice.

Spanish folk bands in the UK
Classical ensembles in the UK