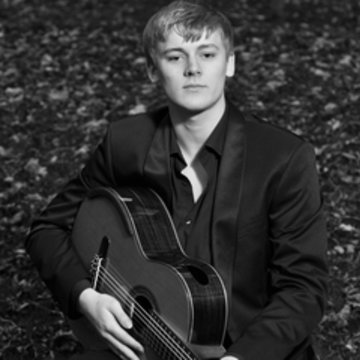 David Kelly is an undergraduate classical guitar student, currently attending Leeds College of Music. He won the first year Joseph Stones Classical Prize after achieving the highest overall mark in his entire year. Although he primarily studies classical guitar and is one of the members of the upcoming ensemble: Las Cuerdas Quartet - who recently played for BBC radio - he also plays double bass, in assorted ensembles such as the College Chamber Orchestra. David began playing music at the age of 7, but it wasn't until he was nearly 12 that he picked up the classical guitar. Whilst this is later than most, he developed a tremendous passion for it and began to progress very quickly. However it wasn't until sixth form that music became very prominent in David's life. He went on to achieve a distinction in his grade 8 guitar exam, as well as gaining his Grade 7 in double bass. Shortly after this he was accepted into several Conservatoires and Universities. He chose to go to Leeds College of Music with a Scholarship where he currently studies classical guitar under Peter Batchelar. As a guitarist, David won various musicianship awards. He also spent several months playing at different cafés, pubs and restaurants where he gained lots of experience playing in public. This resulted in invitations to play at wedding receptions and anniversary celebrations. Since his time at college he has played several recitals including lunch time concerts and participated in Masterclasses with professionals such as Xuefei Yang. He is due to be playing in several competitions in the upcoming year. In his first year at Leeds College of Music he achieved the highest overall mark in performance on the classical course in his assessment and was awarded the “Joseph Stones Prize for BA Music (Classical) year 1, which is awarded each year to the student achieving the highest mark”, and performed at the prizewinners recital to great success. As mentioned earlier, David is currently part of a guitar quartet who has had lots of success, performing concerts at cafés and restaurants; several classical gala concerts at college; as well as playing at prestigious venues such as Wakefield Cathedral, the European Guitar Teachers Association concerts and being featured on BBC radio in a charity event in order to raise money for children in need. Recently, David was selected from his college to apply for a grant from the Royal Philharmonic Society in order to purchase a new guitar and was successful in his application. He currently owns a hand made Cedar Concert guitar by the Luthier Yulong Guo. David would like to thank the RPS for granting him this opportunity. On the double bass, David has played at many prestigious venues including the Bridgewater Hall on several occasions, the ICC in Birmingham, the Sage in Gateshead and many places whilst on tour in the the UK and Europe such as Cornwall, Yorkshire, and Prague, playing in various orchestras including The Hallé Youth Orchestra. He has been part of several ensembles that have won awards at Music for Youth festivals as well as playing in various genres such as Jazz, being principal bassist in the Oldham Swing Band. He is currently part of the College Chamber Orchestra among others. David has worked with some of the best conductors in the country including Andrew Gourlay, Jamie Phillips, Natalia Luis-Bassa, Garry Walker and Sir Mark Elder.