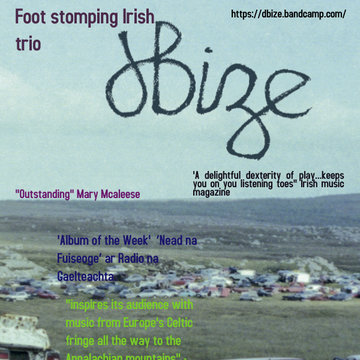 D’Bize are “a trio of extraordinary musicians” (Irish American Chicago)) World class Irish band, dBize have enough individual experience at home and around the world to ensure they'll go down well anywhere; From intricate melodies to stomping four to the floor, dBize are a versatile trio with a very dynamic setlist ofsongs, both new and old from the Folk and Trad traditions of Ireland, Scotland, Cape Breton and Appalchia “excellent and unique music….Neil has a fantastic voice…..Yvonne is a wizard on both concertina and fiddle and Paddy holds it all together with his expert guitar work…” (Irish American Chicago) Yvonne Bolton, (Carlow) Neil Fitzgibbon (Athlone) and Paddy Morgan (Down) are well steeped in Irish traditional tune playing. A touch of Flamenco and US old-time can also be heard in the unique style of this band.Their unique repertoire of tunes “keep you on your listening toes….instrumental combinations fuse delightfully….. a detailed dexterity of play is what you’ll get with (the album) Storm Party” (Irish Music Magazine) Since their formation in 2014, dBize have been in high demand taking in performances at Glastonbury, Electric Picnic, Knockanstockan, Townlands Carnival, Clifden Arts Festival among others. Successful tours of China (Féile shanghai, Shanghai theatre,National Sennheiser Theatre, Radio, Tv appearances) and Great Britian have further cemented d’Bize as an “outstanding’ (Mary McAleese) trio. 2016 saw dBize team up with revered musician and producer Donogh Hennessy (Sharon Shanon, Lunasa.....) to record their official debut "Storm Party". This album was recently featured as album of the week on ‘Nead na Fuiseoge’ ar Radio na Gaelteachta, and a track from the album has been included on transatlantic entertainment on Aerlingus flights for the autumn period; its being well received critically at home and abroad.

D’Bize are “a trio of extraordinary musicians” (Irish American Chicago))