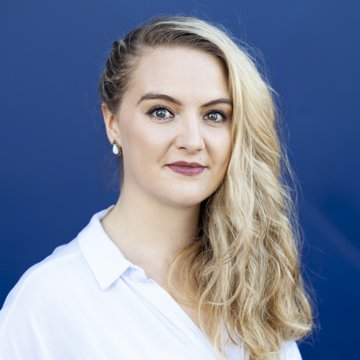 Beth Moxon was a dissatisfied, emotionally frustrated Ella, living largely in her imagination.

Elgar's The Music Makers - The music requires large forces and much subtlety of tone. The combined choirs were equal to the task, as was the striking mezzo, Leeds-born Beth Moxon, whose strong voice and clear diction enabled her to rise above the tremendous wave of sound from choir and orchestra at her back.

Handel's Faramondo - Beth Moxon convincingly captured the conflicted Rosimonda’s inner battle with desire and duty. The only thing she seemed certain about, as she strutted and fretted back and forth, compulsively chain-smoking, was her disdain for Gernando. Rosimonda’s vengeance aria bristled, but her final aria charmed and calmed.

Ida Ränzlöv’s Faramondo and Beth Moxon’s Rosimonda were a good match for each other, projecting different layers in their characters – each strongly declaiming their first aria to show that they mean business, but expressing more nuance later.

Handel's Faramondo - Beth Moxon’s suave Rosimonda is the torch singer...Moxon puts her arias over with the panache of a cabaret star.

Strikingly mature, both vocally and dramatically, Beth Moxon’s Maurya is the centre to this maelstrom of musical grief.

Handel's Israel in Egypt - Beth Moxon had a little more to do, including introducing the first chorus. With only a few chances to impress, it would be tempting to overdo the volume. Instead, she measured And the children of Israel sighed with delicacy. The choral society picked up on that... the whole choir sang their entries with the same spirit: the restraint and refinement made for a moment of true beauty. Her duet with tenor Dominic Bevan and her solo Thou shalt bring them in were sung with flexible delicacy. If Handel’s line demanded tricky rhythmic skips before a long, held note, it sounded perfectly natural, with an engaging shape to each longer note.

There was more Handel (Verdi Prati from Alcina) from mezzo Beth Moxon: sad, wistful and lovely. My highlight of the evening was Monteverdi's Pur ti miro (L'incoronazione di Poppea). A stunning duet from Beth and Sofia, they beamed with serene enjoyment as they recreated the magic of music first performed in 1643

"... startlingly good... the golden-toned, golden-headed Beth Moxon (Nancy)... grew with her role as much as Davies (Herring)