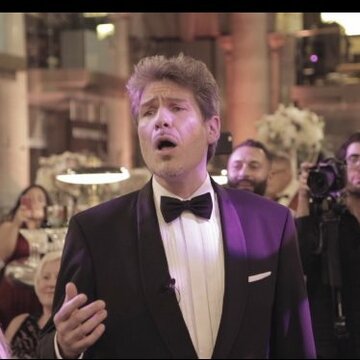 The most amazing tenor in UK, high in demand for private concerts for the most exclusive events.
3 of 14 photos
Singer (Tenor)
London
Public liability insurance of £10 million
Verified profile

A native of Rome, since his professional UK debut as Nemorino in The Elixir Of Love (2008) Yuri has established his reputation as a versatile artist with a beautiful tone of voice, expressive singing and convincing interpretation. On stage he played also Don Josè in Bizet's Carmen, Count Almaviva in Rossini's Barber of Seville, Malcolm in Verdi's Macbeth, Arturo in Donizetti's Lucia di Lammermoor, Ferdinand in the new opera The Tempest, by Joe St. Johanser, and Elvino in Donizetti's La Sonnambula. Yuri regularly appears on the concert platform throughout the United Kingdom and performs at exclusive parties, weddings, private functions and corporate events.

As little as 30 mins before performance time.

If I'm singing to backing tracks, I can bring a PA system with me from which I can play backing tracks. If I'm performing with live music played by an accompanist, it would be ideal to have a piano at the venue, but if that's not the case, I can arrange to bring a digital piano for an additional 100 pounds.

In one occasion, I've learned a Ukrainian folk song in 3 weeks and a Chinese Mandarin song in 4! In both cases, the audience was convinced I could speak the language fluently, so I'm happy to learn a special song for you. There is a fee of £30 for this service to take into account rehersal time etc.

I'm told most often that my performances are spellbinding, it is a mixture of my voice, my character and my interpretation.

Recently: The Midland Hotel in Manchester; The Sopwell House in St Albans; The Grand Connaught Rooms and the Rosewood Hotel, both in Holborn; The Amba hotel in Charing Cross; The Guildhall, the Mansion House and the London Stock Exchange in the City of London.

A gala concert at the Mansion House (Home of the Lord Major of London) for 250 distinguished guests. But I'm not sure that was the most high profile.. I've also sung in front of 10.000 people in Trafalgar Square and that was quite something.

Standard Prices
All prices include:Myself only with backing tracks. If a PA is required I can bring that for an additional charge. If an accompanist if required, I can provide one, but prices vary depending on the type of event and the time we are required to perform. Just get in touch to discuss your requirements and I will be able to suggest and provide the right solution for your event.
NEW!Virtual services
Personalised Music Message
Book me to create a unique music video for you to send to a friend as a gift. This could be a birthday message, first dance song for a wedding anniversary, or just your friend's favourite song to cheer them up.
£15

Yuri came to sing at my husband's 50th birthday party. It was a surprise not only for my husband but for everyone at the party. I couldn't believe a real tenor was singing in our garden, it was such a privilege to hear someone with such talent at such close proximity. We were enchanted for the whole duration, even some of the smaller children sat down to listen! My husband said it was the best and least expected present ever, so we are all super happy. We not only enjoyed the amazing voice but also the ability to get into the characters of the arias, from the sad 'e lucevan le stelle to the funny 'la donna e' mobile'. And the amazing version of 'nessun dorma' at the end, we didn't want it to end! Thank you so much Yuri, we thoroughly enjoyed every single moment and I hope we have the chance to hear your beautiful voice again soon.

Yuri worked with me to create a wonderful programme for a surprise online 50th birthday recital. He was so helpful in advance and a delight on the evening. The audience loved his performance. It was a very special night, Thank you.

When I got the idea to have a concert for my wife I never dreamt that it would turn out to be such a wondrous occasion. Yuri's talent and personality transformed a modest garden party into a truly operatic experience. The whole audience was enthralled by Yuri's voice and thrilled by his introduction to each item. Yuri has my highest recommendation.

Yuri was the highlight of the evening at our wedding reception. I already knew my Italian family would love his performance, but I was surprised to see our other English and European guests singing along at the top of their lungs. It's truly wonderful to see all your guests singing together, I could see in their faces they were having a lot of fun, it was such a special moment. Yuri was always easy to communicate with, very accommodating with our song requests, showed up on time looking great and his performance was unforgettable. I'm so glad we decided to book him!

Yuri’s performance was inspirational.that melted all our hearts with his beautiful voice ,we altogether felt privileged to be his audience .So thank you Yuri ! You are a rare find indeed.

Yuri was the icing on the cake for my husband’s 60th birthday dinner party. He gave us a wonderful & charming performance which encapsulated the very essence of the evening. A kind and charasmatic man- totally dedicated. Thank you, Yuri.

Yuri has an amazing voice. He was very responsive to all my emails/ messages and helpful. Even traveled to venue days in advance to check out sound system etc and coordinated with undertaker etc at my stepdads funeral. Can’t recommend highly enough. A heartfelt thank you Yuri 😊

bellissimo! We had a Fantastic evening with Yuri. He worked with the venue to makesure everything worked out perfectly and performed beautifully. We have already had requests from friends in attendance to book him again.

Verified
Sandra A, 2 years ago

Today was brilliant. Thank you so much. Everyone loved it. (....) Look forward to hearing from you and thanks again for today, Yuri. You were wonderful.

Thank you for your excellent performance for our wine makers and other guests! You could see on everybody's faces that they engaged with the emotions you conveyed in your singing and expressiveness, whether it was the more serious Italian operatic aria or the lighter Neapolitan songs.

Dear Yuri, Thanks! It was an incredible evening, and we saw how the audience really warmed to you guys, and by the end you had them totally captivated! If I may say so, the success of the whole evening in no small measure was down to your contribution (all three of you were fantastic - but, in our opinion. the show would never have worked to the extent it did without a major tenor lead). For many in the audience, you were the star attraction! So, thank you especially! Also the chemistry between all the singers and the accompanist was wonderfully positive, and I could see on the audience faces, that they were really engaged, entertained and impressed.

'When I first saw Yuri Sabatini perform, I realised that he was a special talent. To start with, Yuri has a lovely, warm, rich lyric tenor voice, ideal for thrilling the audience in such classics as O soave fanciulla (La Boheme), Ah! La Paterna Mano (Macbeth) and Ella mi fu rapita (Rigoletto). To complement his singing, when Yuri performs he takes on the character he is playing. So you get a glimpse of the penniless but optimistic poet Rudolfo trying to charm the young Mimi, or the tragic and vengeful Macduff crying for his murdered children, or the dashing but rather misogynistic Duke of Mantua who is stunned because Gilda has been stolen from him! And Yuri goes further: he reaches out to the audience and draws you into his operatic world. Always well worth watching and listening to. Highly recommended! ' Gordon Stuteley, CEO GS Wines, August 2018

Dear Yuri, we all can't thank you enough for making our evening so special. You are a star!! You chose so well the arias and your voice is tremendous.

You were superb. You were amazing. Your voice is unbelievable - it is gorgeous!

Chris B, 4 years ago

Many thanks once again, Yuri, for such an exhilirating, moving and thoroughly entertaining performance.

Singer (Tenor)s in the UK