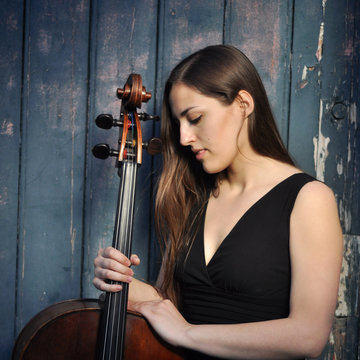 Cellist Yoanna Prodanova was born in 1992 in Varna, Bulgaria. Recipient of the 2016 Philip and Dorothy Green Award for Young Artists, she performs throughout the UK, Europe and Canada. She has performed as a soloist with the Westmount Youth Orchestra and the Sinfonia de Lanaudiere, and has recently appeared at the Wigmore Hall, Barbican Hall, LSO St-Luke’s, St- James’s Piccadilly, Casa de Musica Porto and Tonhalle Zurich. Yoanna is currently studying at the Guildhall School of Music and Drama with Louise Hopkins. She also holds a Diplome d’etudes superieures from the Conservatoire de musique et d’art dramatique de Montreal where she has studied with Denis Brott. She has attended the Music Academy of the West, the Banff Centre, Centre d’arts Orford and the Kronberg Academy Festival where she has worked with Janos Starker,Tsuyoshi Tsutsumi, Jean-Guihen Queyras, Paul Katz, Colin Carr, Raphael Wallfisch and Laurence Lesser. Alongside, Yoanna performs regularly with the Barbican string quartet who are Park Lane Group and ProQuartet artusts 2016 and have won the Guildhall Quartet Prize and Maisie Lewis Prize among others. They will play their debut Wigmore Recital in 2017 following a residency in Aldeburgh festival. Yoanna also plays in the Morisot piano trio, Cavatina Intercollegiate First Prize as well as St James's Prize winners in 2015. Passionate about new music, Yoanna has worked with numerous composers and has premiered and recorded works by Alissa Firsova, Benjamin Graves and Geoffrey Poole among others. Yoanna plays on a Frank Ravatin cello kindly offered to her by the Canimex Foundation, Québec. She is grateful to the Guildhall School Trust, Help Musicians UK and the John Yearly Trust for their generous support.

AM
Andrew M
1 year ago

Yoanna is a lovely person and performed beautifully for us. We would definitely recommend her to others. Thank you very much.

I was surprised and delighted at the speed and proficiency at which Yoanna accomplished the unusual and challenging techniques Klinge(n) posed her, and even more so at how she transformed them and the piece itself into something truly heartfelt and beautiful. She saw expressive heights in the work that even I, its composer, could not imagine upon its conception. If only composers could always work with such a musician.

I've had the pleasure of working with Yoanna Prodanova in performances and in educational settings. We have been colleagues for two years. She is an inspiring, creative, positive, and warm musician.