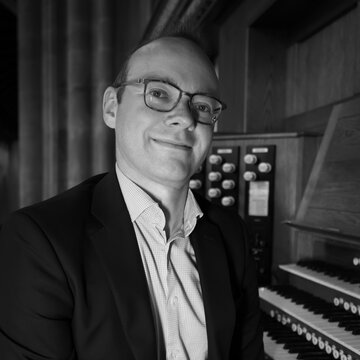 If you’re looking for an all-rounder – accompanist, choral conductor, artistic director, project manager or recitalist – you get the full package with William! I’ve greatly enjoyed working on many and varied different projects with him.” Ben Parry, Artistic Director of the National Youth Choir of Great Britain William Saunders is one of Britain’s leading young concert organists, with an extensive schedule that includes many distinguished venues across Europe. He tours Germany annually and has performed recitals in including Hamburg and Cologne Cathedrals and the St Marien Church in Lübeck. His musical activities in the United Kingdom have included performances at the Cambridge Summer Music and Oundle International Festivals, and he has also accompanied the Kings Voices, the mixed-voice chapel choir of King’s College, Cambridge and Aldeburgh Voices, a choir established by Benjamin Britten. William’s organ repertoire is varied, but he particularly enjoys performing Romantic and modern English music, which has led to the production of a number of critically acclaimed CDs in recent years. The Gramophone commends his technique for its “rhythmic vitality” and his “athletically inclined” playing. “William really does tick all the boxes as an animateur and educator! With his excellent communication skills, natural rapport with the young, awareness of youth culture, superlative administration – not to overlook, of course, his virtuosic and arresting organ playing – he has rightly gained an enviable reputation in the field of organ education and outreach!” – Daniel Moult, Head of Organ Studies at the Royal Birmingham Conservatoire

Happy to be as flexible as possible

2-3 rehearsal time at the venue beforehand

Standard Prices
NEW!Virtual services
Personalised Music Message
Book me to create a unique music video for you to send to a friend as a gift. This could be a birthday message, first dance song for a wedding anniversary, or just your friend's favourite song to cheer them up.
£15
William Saunders

CB
Charlotte B
6 months ago

William was the perfect organist for our wedding - we had so many compliments on how good he was and he was happy to accompany our singer as well. He even learnt an ABBA song for our exit, a personal highlight for me!

William’s a wonderful organist. He played at my mother’s funeral and worked closely with the choir to make sure she got the musical tribute she would have wanted - and for which we were very grateful. William responded quickly and helpfully to calls and emails throughout. I wouldn’t hesitate to recommend him.

Thanks so much Martin!

This recording presents a winning combination of instrument, music, and performer.

OR
Organists' R
9 years ago

This is a superlative CD that should be on every organ music lover’s shelf. William’s playing is quite astounding: musicality, flawless technique and mind-boggling organ management come together in a diverse programme that shows both the dignity and impudence of the composer, performer and the Redcliffe organ.