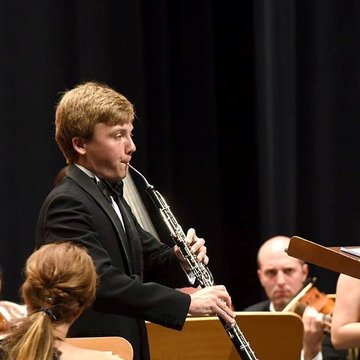 William graduated with distinction from the Royal Academy of Music’s MA course, where he studied oboe with Celia Nicklin and cor anglais with Sue Bohling, in 2017. He is a member of EUYO 2018, touring across Europe and to the UAE and performing at BBC proms, as well as representing the orchestra in chamber ensemble projects in Dresden, at Wigmore Hall, London. Most recently, he performed with EUYO at the Arc de Triomphe in the Armistice ceremony marking the 100th aniversary of the end of the first world war and attended by over 60 heads of state. Together with four contemporary graduates of RAM, he founded the Coriolis Quintet, who perform regularly in and around London. Recent concerts with the Coriolis Quintet include at St Mary's church, Perivale, St Edmund's church, Northwood hills and at St John's Waterloo. They have also recorded a music video with singer Hannah Peel. He was a participant in the 2017 Encuentro Santander, where he played in solo and chamber music concerts across the Cantabria region and was cor anglais soloist in the Copland’s ‘Quiet City’ in the festival finale concert. During the same year, he won the Lions Club prize at the Barbirolli International Oboe Competition. William plays regularly with numerous orchestras in London, including Orpheus Sinfonia, London Young Sinfonia, Outcry Ensemble, Melos Sinfonia and Orchestra Vitae. He also has experience of performing at functions and weddings, both as a soloist and as part of chamber ensembles. William previously read Natural Sciences at Clare College, Cambridge obtaining an MSci in Physics. He then worked as a sports analyst and forecaster for a year before joining the RAM’s MA course.

We booked William to perform in our Peterborough Sings! concert and were delighted by his playing. The whole orchestra sounded fantastic, and we wouldn't hesitate to book William again.

Thank you so much for masterminding the Coriolis Concert at St. Edmund's. It was a most enjoyable afternoon and you all played beautifully - lots of praise from the audience.

An entertaining concert of varied music

Oboists in the UK
Oboists in Salford
Oboists in Greater Manchester
Oboists in Stockport
Oboists in Oldham
Oboists in Bury
Customer Service
Discover
Company
As seen on
© Encore Technologies, Ltd.
Crafted with bagels and in London