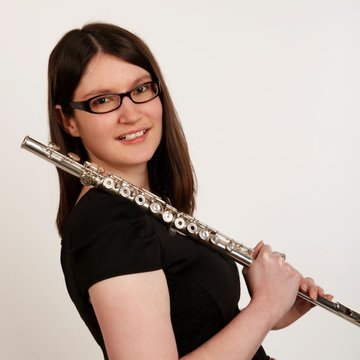 Check availability and get a free quote now - no commitment to book
From£180
Watch & Listen
About Vicky
Home page
Vicky Guise
Like Vicky?
Watch & Listen
1 of 1 video
Karsten Brustad - If Night's Dawn Imposed All (INDIA)

Vicky is currently working as a freelance flautist and teacher based in Cardiff, South Wales. She has worked as an extra for the Orchestra of the Welsh National Opera and the National Symphony Orchestra as well as playing principal flute for Cardiff Sinfonietta and Cardiff Chamber Orchestra. Vicky is part of the Icaris Duo with guitarist Will Browne, with whom she auditioned successfully for the Live Music Now scheme and was selected to perform a lunchtime recital at St Martin in the Fields. She was awarded scholarships to study on the Master of Music postgraduate course at the Royal Welsh College of Music and Drama in 2010 with Jonathan Burgess and Sarah Newbold, having previously graduated with a First Class undergraduate degree in 2010.