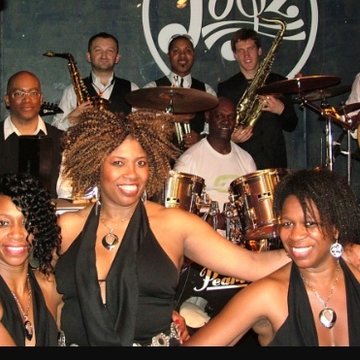 Who we are: We are one of Londons longest running Soul and Funk Bands, which has been around since the eighties. We play Soul, Funk disco and R&B and as well as the classics covers and floor fillers that everyone knows, we also write songs with a soul and funk classic feel and play the lesser known pieces too. The band is fronted by the glamorous Hughes sisters, who are from a soul and gospel background. The full band has lead and backing vocals, rhythm section and horns. We are a highly professional group, available for all types of event and at any type of venue. Biography: In the summer of 1984, Clyde Morris came to London and met bassist Chester, (A.K.A Godwin Sylvester) in a reggae band called W.O.W (Words of Wisdom). The band included the young saxophone prodigy Steve Williamson of the Jazz Warriors who at the time were a major force in the British jazz scene. Before W.O.W, Chester played in a band called “The Enchanters” as the major support act for Misty (Inroots) taking part in G.L.C sponsored ROCK AGAINST RACISM concerts across the UK for four years which included a concert at ”The Rainbow Theatre” also featuring Pete Townsend (of 'The Who') & Friends, Aswad and The Clash. Clyde played in various reggae, blues and soul groups and played in a band that supported Randy Crawford on her 1986 UK tour. Unikque (pronounced ‘Unique’) was formed in the autumn of 1987 by bass player Chester and the guitarist Clyde. Based at West Star Studios in West London, auditions eventually found three sisters to perform vocals, Ann, Samantha and Bernadette who were collectively known as ‘THE SAPPHIRES’. The Sapphires from Berkshire, in the tradition of many great American artists started their careers singing gospel in the church and received rave reviews for their stylistic performances of varied music. Not only can these sisters sing, they can dance too, choreographing all their own routines. Ann and Bernadette provide the harmonies while Samantha tells it like it is, a truly inspirational vocalist for the rest of the band. Also joining the band from Berkshire was drummer Kenny Williams, using electronic Simmons kit. Kenny had been playing in bands since school days and had a great feel for music. In 1988 Unikque started doing headline shows concentrating mainly on the London venue scene. In 1989, the band signed a performance contract on the books of Carousel Artistes Agency who were a major London based booking agency who provided gigs for the band at American Force Bases throughout the UK. Kevin Sutherland, from East London, keyboardist and band leader for 90’s funk band Liberty was an ever present guest player on those early agency shows. In 1992, versatile keyboardist Victor Matty joined Unikque teaming up again with Chester who was a member of Victor’s 12-piece soul/funk band “Full Circle” in 1986. The following year also joining Unikque was seasoned acoustic drummer Cosmo Bowen who in the mid 80’s played in a soul band that had a recording deal with a major label Epic Records. The ending of the Gulf War caused American bases to make so many cut backs that by 1994, 90% of them were forced to either shutdown their club or close the site completely. Unikque carried on doing live shows in the capital, playing at venues which included The HQ Club, The Rock Gardens, The Cave, Fresh at Bull & Gate, Russell Square University, The Orange, The New Pegasus and music industry show-case gigs on celebrity nights at Xenons in Piccadilly , London’s west End. In 1996, Clyde left the band to pursue Blues projects and s currently playing in two bands at venues across the capital. He was replaced by a talented young lead guitarist from Sevenoaks in Kent, Mike Ross who had experienced some great moments being a member of the rock band INDALO and doing a live radio broadcast across London with members from the Brand New heavies. In 2000, Unikque recorded a single “Gimme Your Love” in three versions featuring an RnB mix, a hip-hop mix by JD Flemming and a Dance Mix. The band’s current live shows are a mixture of popular 80’s soul & funk grooves and Unikque’s own versatile original soul & funk material, based heavily on the influences of the American feel and chord structure. Welcome to the sound of UNIKQUE.

The band is fronted by the Hughes Sisters (Bernie, Ann and Samantha). Two of the sisters are married to two of the other band members and the keyboard player is the brother-in-law of the sax player. Sonthis really is a family band with no dep musicians used.

We mainly perform as a full band or you can hire just the singers.

Please let us know as soon as possible ifbtimings chsnge andcwe will try our best to accommodate you.

Yes, this is a standard service that we provide. .

We usually need between 60-90 minutes to set up and sound check properly, after which we can provide recorded music from a lap top or iPod until our live performance begins.

If you have particular songs from our set list that you would like us to play, we can definitely do that for you.

We may already know a song that you would like us to play. But with sufficient notice given, we can try and learn it for you.

We are an established family band with a loyal following and that we also sound authentic- very close to the original song.

Classic soul and funk artists from the 1960s onwards.

Unikque are a fantastic live band that features top musicians and singers who put on a great live show at last year’s Wokingham Festival, with powerful soulful vocals and a smooth funky soul sound this band are guaranteed to get the audience on the dance floor. Graham Steel Music Company http://www.grahamsteelmusiccompany.com

Review A, 7 years ago

Super Venue where they made it a 'Night to Remember'” Olive B (1 review) Egham, United Kingdom It was my birthday dinner party and I booked a table for 10 people on 22nd November when the band 'Unikque' were performing. The band were fantastic and we were up dancing for most of the evening. Olly (of Egham) Date of visit: November 2014

Review A, 8 years ago

Zorro12 (1 review) Crowthorne, United Kingdom I booked Jagz for our works christmas do a party of 18 for Saturday 21st December 2013. In previous years we had struggled to find a fun packed evening which would suit all tastes....... The band Unikque had 3 marvelous ladies who belted out songs and rocked the house and their backing band were amazing.....I would highly recommend this venue and will defiantly be going back for another fabulous night out.

Review A, 7 years ago

angie w (3 reviews) London, United Kingdom What a great Christmas party we had at Jagz, we also saw a band called Unikque and they were great

Review A, 8 years ago

Rolo350 (8 reviews) Ascot, United Kingdom I booked Jagz for our Christmas Party on Friday 20th December. We saw Unikque - a fabulous 5 piece soul band with 3 vocalists. I had not seen them before but they soon got everyone into the party spirit and we danced the night away after our meal. I would highly recommend them