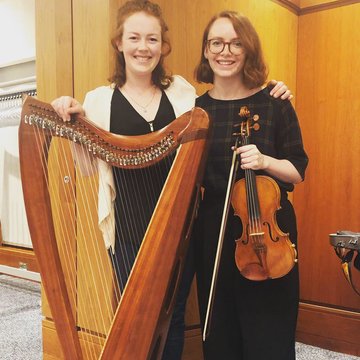 A dynamic duo of original Scottish fiddle and clarsach music with a contemporary twist.
3 of 3 photos
Acoustic duo
Inverness

Turadh is a duo of fiddle and clarsach that began in the Scottish Highlands near Inverness. Emma Donald, a graduate of Edinburgh University, is an accomplished violinist both in classical and Scottish traditional style. She is currently based in Edinburgh working as a full time musician however is in high demand throughout the rest of the UK performing with groups such as Scottish Ballet in Glasgow and Magnetic Opera in London. The clarsach player, Isbel Pendlebury, graduated from Strathclyde University’s esteemed BA applied music degree. A highly skilled performer having performed at events from the Lorient Interceltique music festival in France to the Metropolitain club in New York, she continues to compose and perform in the highlands alongside working as a secondary school music teacher. Emma and Isbel are both passionate composers of traditional music, which is what initially brought them together as a duo. They both strive to push boundaries of what is expected from their instruments along with composing original, exciting and challenging music.

" Your playing elevated the gathering from the ordinary to the extraordinary and you made it a very special evening for everyone."