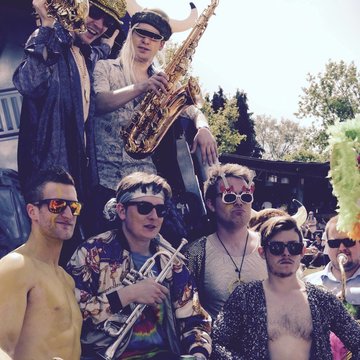 Tuba Libres have unleashed a wave of brassy goodness on the south coast. Their fun-filled antics have got audiences moving since they formed in Southampton in 2015. Expect energetic lunges, sizzling solos and heavy hitting grooves all backed up by some fat horns. They’ve played alongside the Hot 8 Brass Band and Too Many Zooz, as well as appearing on BBC Radio and at numerous festivals such as HogSozzle and Rhythmtree. In 2017, they independently released their much-awaited eponymous debut album, Tuba Libres Linden - Bone James - Hitting things Greg - Hitting James Mike - Smaxamaphone Laurie - Teenymaphone Alex - A great big horn Jay - Moustaches Jamie - valvy bits Neil - occasional valvy bits Beth - occasional smaxy bits