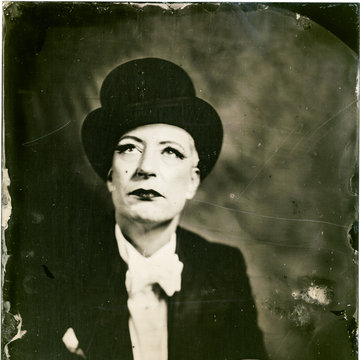 Tricity is a singer, ukulele player and award-winning cabaret performer, with a vintage aesthetic, and a warm and witty stage persona.
Singer (mezzo soprano)
London
Public liability insurance of £10 million

Tricity began singing jazz in Sri Lanka in the early 1990s, ran her first jazz band, Lush Life, in Nottingham in the late 1990s, and after moving to London in 2002 has been the bandleader of four bands. She started the Tricity Vogue All Girl Swing Band in 2011 after meeting members of the iconic Ivy Benson's All Girl Swing Band, which performed all over Europe from the 1930s to the 1980s. Tricity also works solo and with one or two accompanists as a cabaret entertainer, brandishing her ukulele and kazoo, and keeping her audience engaged, amused and entertained, whatever their age and predilections. In fact, predilections are her speciality.

Thanks for such a beautifully orchestrated performance. Tricity Vogue's All Girl Swing Band was a stunning, impressive feature of the Royal Festival Hall's Winter Festival activity offer and you animated the space wonderfully! Our sincere thanks!

It was such a fabulous gig, full of joyous swing and gorgeous music and song (and Josephine Shaker's energetic dancing). So lovely to be part of such a suitably enthusiastic audience caught up in the infectious rhythms. A real boost and tonic on a dark, cold, damp winter afternoon. Congratulations and thanks, one and all The whole look and sound of you and your gorgeous and wildly talented band oozed such style and fun. No wonder that so many took to the dance floor while others joined in in their own way, toe-tapping, hand clapping, singing, rhythmically swaying etc.

Just amazing! I never thought the entire family would stay until the end. Seeing my [censored] year old step mum dancing to Rasputin was something else. The Copa Cabana was one of those moments that you just couldn't plan or imagine! It was just hilarious! Thank you again!

Singer (mezzo soprano)s in the UK
Ukulelists in the UK