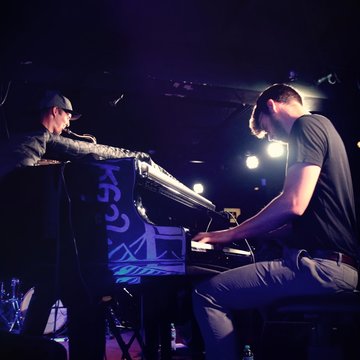 Tom is a Franco-American Pianist born and raised in Paris, France. He moved to the UK in 2008 to study Music at Royal Holloway, University of London. This was a great place to collaborate and create with like minded musicians and artists, allowing him to perform and compose in classical, jazz and blues genres. University also provided a comfortable environment for learning to score both films and theatre. His passion for Jazz, however, only truly blossomed after University when he moved to London and began to study the rudiments, first on his own, and then privately with award winning pianist Tom Cawley. It's around this time that he began to also compose for quartet and brainchild : Phoenician Blinds. This contemporary jazz quartet has kept very busy and released two albums, gone on several UK tours and recently been nominated for an UMA Award for Best Jazz Act 2018. Having studied Jazz piano for a few years, Tom developed a true love for the art and currently plays Jazz and Latin standards, both on his own and as part of larger outfits, around London and the UK, for both public and private events. Today he focuses in equal parts on playing with his own original quartet, Phoenician Blinds, playing Jazz and Latin standards for private events, but also composes for film and theatre. His most recent collaboration was with physical-theatre dramaturge and actor Maite Jauregui. Tom was asked to write five pieces of instrumental music to accompany the one-woman piece entitles UNA.

Verified
Linda B, 2 years ago

Linda and her party were very happy with the Tom Sochas band and will definitely as will I consider them for future bookings.

Always a pleasure to have Tom play at our restaurant on Saturdays!