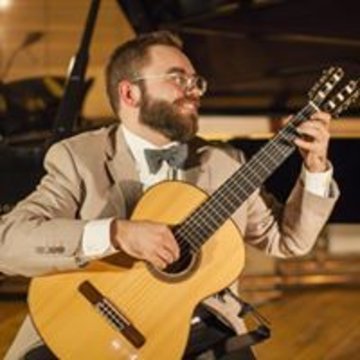 Portuguese classical guitarist Tiago Gomes has performed on international stages such as The Queen Elizabeth II Conference Centre, in countries including Portugal, Italy, Belgium, Germany, Russia, France and the UK. Tiago plays a 2008 concert guitar custom made for him by the world renowned Spanish luthier, Paco Santiago Marin. He has performed within various small chamber groups including flute, violin or voice, playing repertoire from Dowland’s songs to Piazzolla’s Histoire du Tango. He has also performed Rossini’s Il Barbiere di Siviglia and Weill’s Die Dreigroschenoper with Orquestra do Norte and Royal Academy Opera, respectively. Tiago graduated from the Royal College of Music in 2016, and from the Royal Academy of Music in 2011, besides obtaining their Teaching Diploma. He has also participated in various masterclasses led by well-known guitarists such as Alberto Ponce, Roland Dyens, Fábio Zanon, David Russell and Robert Tear, amongst others.

On the day I went, the music was a mix of Broadway, Opera and guitar. The standard of which was exceptional. Great venue and Sofia and Ross were very welcoming hosts. I went on my own and had a great time. I will definitely be looking to book for the Sunday evening concerts, when they are up and running.

It was an amazing evening, enjoying the mix between guitar, piano and the great voices, being closed to them. Highly recommended !

It was an amazing evening in a a very special environment and very talented artists. We enjoyed the hospitality and the music. A unique experience that I highly recommend.

Your guitar interpretation of “Agustin Barrios ” music works were strikingly impressive. It is the first time that such micro-recital had been seen and heard by the Society members and others. I could tell by the warmth of the applause how much your insightful recital was appreciated by the audience. His Excellency the Paraguayan Ambassador and the director of Cervantes Institute have expressed a great interest and welcome your excellent play.