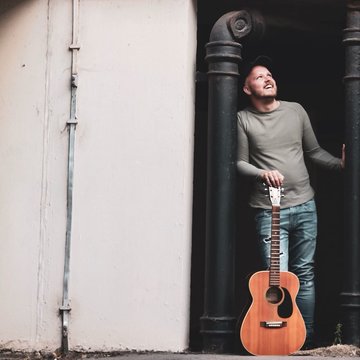 Tom Tonks was born on the 25th April 1993 in his hometown of Lowestoft. Right from the very beginning Tom was always destined for a career in music with both his parents and other members of his family being musicians and performers. It started from the beginning where Tom would always accompany his father to festivals and gigs from a very young age which benefited him in learning the technical side of the music industry. Tom started playing guitar at the age of 11 and soon realised music was his passion and something he really enjoyed. He saw a variety of people perform whilst in school and this gave him the inspiration to play an instrument and be able to sing himself. Tom started to get involved in school performances and local shows, to then start song writing and beginning to learn his craft. He then left school and the shows started to get bigger and better and he started to spend a lot of time in several recording studios finding his own unique sound. After spending several months of hard work Tom began to do a lot of local gigs and started becoming well known in Lowestoft. Tom was then chosen to be involved with Channel 4's "Rock School" where he was mentored by well-known singer and bassist 'Suzi Quatro' and 'Nicko McBrain' the drummer from Iron Maiden. Tom then released a single and official music video of his own written single titled ''Happy Face'' in March 2014 which sold a substantial number of copies and he was also very fortunate to have been in a duo with a incredibly talented singer/songwriter Chris Hardman (Lil Chris) but unfortunately to his passing could not proceed any further with it. 2015 was an incredible year for Tom when he was given the opportunity to open up The Hoosiers 'Secret Service' Tour which went incredibly well and has opened up new routes in the music industry. He was also given the opportunity of performing at Norfolk’s 'Sundown' Festival which received a positive response and where on his travels he met chart topping artist Maverick Sabre who told him ''It was great to meet you and keep up the good work''. Tom is now working with other established artists to release new music and gather new material for future gigs. Tom Tonks Is definitely an artist to keep your eye on for the future!

SS
Sarah S
4 years ago, for a Private event in Lowestoft

We love Tom. He has such a talent, He performed at our daughters leaving party and everyone commented on how great he was. I Highly recommend Tom for any occasion!

NP
Nicky P
5 years ago, for a Birthday party in Lowestoft

Tom is a great musician, he can perform a variety of Old and new music and he gets everyone up to dance - He is a great addition to any party !