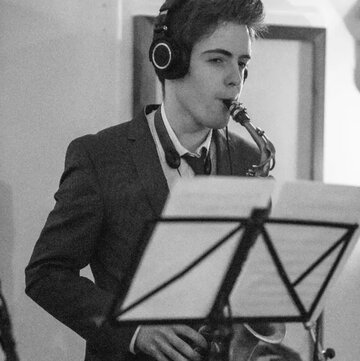 Tom Olsen is an award winning and adaptable saxophonist, arranger, clarinet player and composer based in London playing jazz, blues, samba, pop and classical music. He is influenced by musicians such as Bill Charlap, Oscar Peterson, Donny McCaslin, Sonny Stitt and Paquito D'Rivera. His jazz playing is heavily swinging, influenced by Basie and the wailing blues of Oliver Nelson and his ballads move audiences. He was the winner of the Jon Hassal prize for Jazz at Trinity where his teachers included Jean Toussaint of Art Blakey and the Jazz Messengers. Tom also came second in Wales in the Under 19s Composition Competition in the Urdd Eisteddfod. He has performed with the Vic and Dougie Six in the Houses of Parliament as part of Pride at Night which marked fifty years since the passing of the Sexual Offences Act and has performed at Ronnie Scott's with Trinity. He has just finished at Trinity jazz department which produces some of the finest jazz musicians in Europe including Mercury Award nominated Laura Jurd, Jazz FM award winning Ezra Collective, Sam Smith's piano player and members of Kansas Smitty's house band. ‘I’m completely bowled over by your playing’ Mike Williams ‘Burning’ Martin Speake.

Yes, I offer an iPod service for free and am known for very good taste creating a real atmosphere in the venue

Tom and Fuego Blue have played already a few times at BA.RN and as always the enthusiasm and great atmosphere takes over the place and customers have an excellent evening of great jazz. The versatility and range of the trio is clear and each musician shines at their own master skill. Don't be fooled by the young looks, these guys know their jazz.

Tom Olsen is a young bright versatile musician. Tom plays saxophone in various ensembles around London in addition to performing with his own band. He is admired and respected by fellow musicians and those who have the pleasure of working alongside him. His writing talents also include creating impressive compositions. Stephen Pierre Creative Director Unity Music Arts Trust