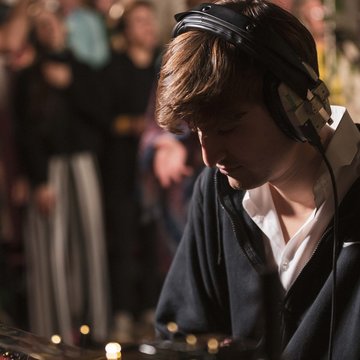 “The Rachmaninov 3rd piano concerto is the Everest of all concertos and its heights were scaled by our young french composer pianist with great elegance and lyricism.” - Christopher Axworthy “Wonderful music-making” - Cambridge Independent (2018 Cambridge Philharmonic Orchestra) French pianist Thibault Charrin is a graduate of the Guildhall School of Music & Drama. He recently recorded in Abbey Road Studios with artist Saskia Griffiths-Moore; performed and recorded in June 2019 Rachmaninov’s 3rd piano concerto with the Hornton Chamber Orchestra conducted by Jack Wong; gave a solo recital in February 2019 in Debussy’s House; premiered in December 2018 his Sonata for piano and violin with Enyuan Khong at St James’s Piccadilly, a composition celebrating the centenary anniversary of Claude Debussy; recorded in May 2018 at the State Philharmonic Hall of Oradea (Romania); performed in March 2018 Poulenc’s concerto for two pianos alongside pianist Nicolae Mihaila with the Cambridge Philharmonic Orchestra conducted by Timothy Redmond. Thibault participated in a Music Performance Research led by professors David Dolan, John Sloboda, Henrik Jeldtoft Jensen, Björn Crüts and Eugene Feygelson presented in the 2018 Edition of the Reflective Conservatoire Conference; went to the Royal Conservatoire of Den Haag (Netherlands) for the flagship European project METRIC on classical improvisation; St Marylebone Festival in London featured his final recital program in July 2017 and welcomed him again in 2018 for a unique improvisation duel. He has taken part in piano masterclasses led by Anne Queffélec, Robert Levin, John Rink, and Bernard d’Ascoli. In his time at the Guildhall, he studied orchestral conducting with Timothy Redmond, worked with Philip Jenkins on piano repertoire, and on classical improvisation with David Dolan; he developed an important bond with this trio of artists / professors, who still today bring him advice especially in his work of creation. In 2017, he is awarded a Masters of Music with first class distinction at the Guildhall School and is the second prizewinner of the VIIth Piano Composition Competition Fidelio. In 2019 he is a finalist of the Classic Pure Vienna Composition Competition and receives Honorable Mention in composition for the Edition 2019 Les Musicales du Centre. Passionate about Cinema and Theatre, Thibault regularly works with actors, musicians, stage and film directors. He worked as an extra on the film set of the Netflix series The Crown S3; participated in the filming of the award-winning short film Nation Down by director Liam Hendrix Heath; directed a documentary on opera with the participation of artists from San Francisco Opera and Arch Sinfonia; aged fifteen, he embarked on a project where he developed his own CGI world and focused on a meticulous placement of visual effects, story telling, and music composition – The work received hundreds of thousands of views after publication and was praised from users worldwide in the Tech and Gaming industries. He produces today his own recordings (studio / live) and is experimenting with new technologies to explore possibilities to create a new generation of classical concerts. Thibault Charrin is generously supported by Talent Unlimited UK.

CA
Christopher A
3 years ago

The Rachmaninov 3rd piano concerto is the Everest of all concertos and its heights were scaled by our young french composer pianist with great elegance and lyricism.