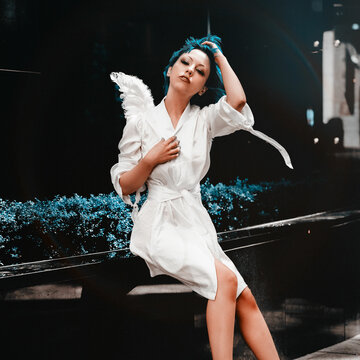 Theresa Terzonie is an Alternative Pop/Rock Artist with over 10 years experience in the industry and is guaranteed to make your event special, tending to all of your personal needs on the day. Feel free to message her with your enquiry, and she will respond promptly to your message and also organise a Skype consultation.

Absolutely. This is a really popular request and I actually offer this service for £25. If you'd like a DJ service via our PA after the final set until the venue closes, we provide this for an additional £200.

I usually set up about 1 to 1.5 hours before the performance time. As soon as my PA is set up I can provide a £25 playlist service to help set the atmosphere and get your guests ready for my live performance!

My set list is crafted from countless performances and learning what works best to ensure guests dance and have an amazing time. However, I'm definitely happy to chat through and make sure I find what works for your event.

Yes, absolutely! I bring my own instrument to play acoustically, PA system and also cater to more electronic performances with my electric guitar.

They love the authenticity, humour, and inclusiveness I bring to performing for special events.

The 02 Academy, The Village Hotel, Sheffield Town Hall & much more!

The 02 Academy for the Final of the Centre Stage Competition, to play Leeds & Reading festival!

Standard Prices
All prices include:PA equipment, Skype Consultation, and up to 3 Song choices for your special day or occasion.

There is one TREE and she is brilliant.

Excellent work - fulfilled all expectations for this shoot and recording

Artistic integrity second to none. Brilliant.

Professional performer. Theresa is a great communicator and dedicated to her Art.

On this occasion Tree was a tremendous performer. Professional as ever.

Superb analytical skills. A joy to work with and highly professional.

Excellent communication before the session. Would be pleased to work with Theresa again.

Tree shows up fully for herself and by doing so is able to show up for the greater whole. She greets every challenge with a smile and is versatile with a wide variety of instruments from vocals and lead guitar, to keys and bongos. Her sense of fun is a consequence of her highly professional approach to music. She has done the theory and is now fully engaged with the practicalities of musicianship.

Theresa is a dedicated session singer, a talented musician and an epic songwriter. She is very passionate about her work and always gives her absolute best to the music. She is able to think creatively and outside the box with confidence and ease. She is very comfortable working in a multitude of different styles and genres. Her vocal performances are always a pleasure to listen to - especially when she is able to provide such interesting and original melodies, work within unusual scales and deliver powerful and memorable hooks.

Tree is a fabulous inventive singer and an inspiration. Highly professional, she has given inspiring performances throughout 2020. Craig BGBC Films

Tree is incredible to work with. She’s a very fast thinker, a very talented writer, a great vocalist and an all round brilliant performer!

Verified
Adam B, 6 months ago

Great to work with Tree hosting a wrestling event for Classic UK Pro Wrestling, it was a pleasure to work with her, professional, did more than what was needed, and took over when it was needed. Professional, and kind. Can not wait to book her for more events.

Verified
Adam B, 1 year ago

Working with Tree was a pleasure. She is a nice and very kind person. An extremely talented performer. Tree performed her own original track, 'Moth To A Flame', and a Cover version of Paramore's 'Still Into You' for a wrestling event for one of the champions, which is what the client wanted. She also has a great, strong voice, is an awesome guitar player and always dresses well with a different, unique look for shows. Looking forward to working with her again soon for future events. ☺️

Theresa is a diverse and highly professional musician. Her knowledge and ability in singing and guitar is some of the best I've ever listened to live. Her performances are always utterly moving, funny and outright entertaining. Having worked with Theresa, she has always been really easy to work with from the initial communication through to executing her spellbinding show. I wish more musicians were more like Tree!

Theresa Terzonie is a refreshing new talent with lots of original material. Her performances always are amazing and well attended. I have had the opportunity to attend many of her performances and each is better than the one before. A thoroughly enjoyable experience

During the event “Pop op de kaap” in Rotterdam I watched a performance of Theresa Terzonie in Cafè De Ouwehoer. What impressed me the most was the energy she had during the whole performance. It was one of the last performance of the festival and all the people around were quite tired. She managed to spread the last and very powerful “energy boost” to the audience. Her attention to detail was also very good, especially in terms of stage presence. In some moments of the performance she hypnotized me and left me in some way “paralysed”.

A little while ago, Theresa was a guest in my radio show. What a fantastic woman and what a great voice! Wow, like a blackbird on an early spring morning. I interviewed her and she has sung 4 songs. Only her voice and her guitar. It was a beautiful acoustic set that I still think about regularly. And of course Theresa herself: a real sweetheart.

My experience, as a guitar player, working with Theresa has been delightful and satisfying. Theresa always has a positive attitude and is fun to work with. She comes prepared to the rehearsal and has no problem composing guitar, vocal & backing vocals line & melodies on the spot. She is open minded and adaptative to change. She has no problem putting the music on tracks that's completely the other way than she intended. Above all she is a real song writing machine on her own, every rehearsal she comes with new ideas, new songs etc. I can only recommend working with her as I have learned a lot from her myself. To put myself out of my musical comfort zone in the process of creating original music. Overall it was a very pleasant and gratifying experience to work & create music with Theresa! I hope to be able to work with her again in the future.

I’ve managed to catch Tree twice now in the limited time I’ve seen her on the circuit, the first time I was greeted with a solo performance, just Theresa by herself with an acoustic set. As soon as she showed the crowd her prowess on the guitar alone, the room was fixated, when those soulful vocals kicked through I was amazed I’d never heard of or seen this artist on the circuit before. The second time I managed to catch Tree at a show was when she had full band accompaniment. Now I instantly recognised parts of these songs before from the solo set but arranged for full band now, these songs took on another form. I honestly couldn’t pick which arrangement I liked best, as I’m more attuned to and have a preference for full band style playing this was a shock to me. Tree brings that folk style of writing with a more heavy rock/metal kind of deliverance in attitude, think Stevie Knicks crossed with Ann Wilson from Heart. Thoroughly enjoyed watching her perform and if I knew a show of her was coming my way, I would mark it in my calendar.

Theresa Terzonie is an extremely hard working individual whose performance at the 02 Academy, Centre Stage was striking and a night to remember. It was my favourite performance of Tree's and I will not forget that evening.