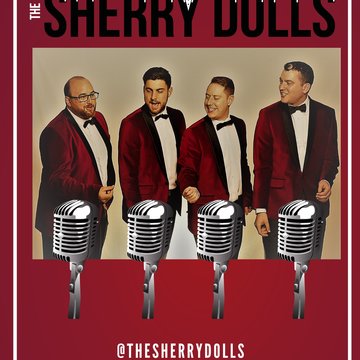 About The Sherry Dolls

The Sherry Dolls are are tribute group to Frankie Valli and the Four Seasons.
3 of 9 photos
1960s era tribute band
Aylesbury
Public liability insurance of £1 million

Formed in early 2019, The Sherry Dolls are the UK's hottest new Franki Valli and the Four Seasons tribute act. A whirlwind few months has seen the group perform at weddings, community festivals and musical revue shows. The Sherry Dolls are proud of their close harmony work, and each of the four singers has a unique vocal tone and personality which complements and enhances their sound and their performance. Set apart from some of the other Four Seasons tribute acts out there, the Sherry Dolls don’t rely on a single strong lead playing the part of Frankie, but instead each member takes lead vocals on a number of songs, bringing freshness, variety and unique interpretation to the iconic sounds of The Four Seasons. With decades of collective experience of stage performance, John, James, Carl and Dan first met in the world of Musical Theatre, though several members of the group are also accomplished instrumentalists with passions in other musical genres. Sherry Dolls founder James has also performed internationally as part of a resort entertainment team, where he first appeared on stage in a ‘Jersey Boys’ show. The rest, as they say, is history.

Our line up is as follows. 4 Male Vocalist singing to play back track.

We can provide an iPod or iPad before our sets if required.

The Sherry Dolls need around 20 minutes to setup

Currently we do not have any sound or lighting equipment. This will be an additional cost for the band to hire the equipment.

If a song isn't included in our song list there may still be a chance we already know it. If there is a special song you'd like us to learn we are happy to do this for you. Just please let us know 4 weeks in advance.

The Sherry Dolls have performed at Abbotts Langley, The Abbey Theatre in St Albans and at a festival in Watford.

We have been influenced the most by Frankie Valli & The Four Seasons and all the other music from the 60s era.

Currently our most high profile gig is a sold out show in St Albans.

GB
Gayle B
2 years ago, for a Charity event in St Albans

The Sherry Dolls made a special guest appearance in a charity fundraising cabaret evening I organised recently. Their superb vocals, slick routines and buoyant personalities brought the house down! They were a fabulous addition to our event and I wouldn’t hesitate to recommend them. Gayle Bryans, Chair of Trustees, Herts Inclusive Theatre

AS
Aditi S
2 years ago, for a Charity event in Abbots Langley

I recently saw the Sherry Dolls live and was blown away by their performance. From slick suits to tight four-part harmonies these guys had their act extremely polished. The crowds reaction was second to none and despite the rain, every single audience member was hooked until the last note. Their undeniable talent and performance quality made then an absolute pleasure to watch.