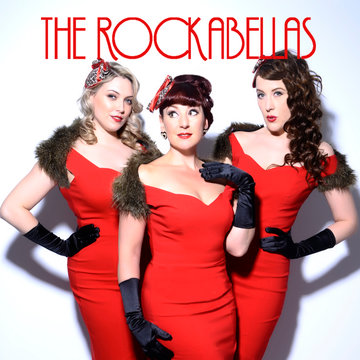 “That was fantastic, you sounded amazing!” Jonathan Ross “Your look is spot on and the harmonies are mellifluous and perfect for the music of the 40s. It was a joy to hear...I believe your music will go a long way” Dame Vera Lynn "Intricate, well presented and thoroughly entertaining...Today's answer to The Andrews Sisters" The Stage Newspaper. With killer heels, killer curves and killer harmonies, this velvety vocal trio have been called to the musical front line to lift the spirits of ladies and gentlemen all over the world. Combining stunning close harmony vocals with bespoke big band arrangements, cute choreography and top to toe pin up couture, these sassy songstresses serve up a perfectly nostalgic mix of toe-tapping tunes from swing-time songbirds and red hot rockabilly groups, right through to modern day pop which they beat into submission with their retro sticks! Founded in 2009 by singer and actress Sarah Lindsey, The Rockabellas quickly became a firm favourite with high-end corporate and commercial brands including Bentley, Mercedes-Benz, Tiffanys, Twitter, British Airways, Neff, Cath Kidston and Nespresso, performing at a host of renowned banqueting suites and top hotels including The Savoy, The Ritz, The Grosvenor, The Hilton and The Dorchester to name but a few. With regular shows at famous retro joints The Pigalle (now Electric Cafe), Troxy and Café De Paris, The Rockabellas are also highly regarded on the vintage cabaret circuit and were awarded at The National Vintage Awards in the Best Vintage Style Musical Performer Category in 2012. They are regular features, both on stage and in the press, at major sporting events such as Epsom Ladies Day, Royal Ascot and The Grand National and have performed at Wembley for the 2012 FA Cup Final and Allianz Park for The Saracens Season Open Launch 2013. The Rockabellas were the first repeated act in the 20 year history of the ‘Battle Proms’ picnic proms concerts, where for five consecutive years they performed to thousands of people a week at stunning stately home locations such as Blenheim Palace and Highclere Castle, home of Downton Abbey. To date, their largest audience was at the official Queen’s Diamond Jubilee Family Festival in Hyde Park where they thrilled over 100,000 people with their bespoke Jubilee dresses and Union Jack pill box hats, closely followed by their thrilling performance to 7,000 singers at Birmingham’s NEC for the 10th anniversary of national phenomenon Rock Choir. With a jingle campaign for mobile phone giant Orange, Television features alongside Frank Skinner and Suzi Klein (‘What Performance’ BBC4) and for Tim Minchin, Dawn French, Ruth Jones and Michael Sheen (‘Ruth Jones Easter Treat’ BBC4), a live performance for Jonathan Ross on his Radio 2 Arts Show, theatre billings throughout the UK with their sell-out shows Sirens of Swing and As Time Goes By, plus foreign engagements in Europe, Asia and America, The Rockabellas have certainly been there, done that and worn the pencil skirt!!!

REPERTOIRE
42nd Street
A Tisket A Tasket
Alexander’s Ragtime Band
All About That Bass
All That Jazz
As Time Goes By
Beat Me Daddy Eight to the Bar
Billie Jean
Boogie Woogie Bugle Boy
Cabaret
Candyman
Can’t Buy Me Love
Chattanooga Choo Choo
Cheek to Cheek
Crazy in Love
Creep
Diamonds are a Girl’s Best Friend (‘Sparkling Diamonds’ the Moulin Rouge version)
Don’t Sit Under the Apple Tree
Dream a Little Dream of Me
Fly Me to the Moon
Gershwin Medley (Someone to Watch Over Me / Slap That Bass / Fascinating Rhythm)
Get Happy
Goodnight Sweetheart (a capella only)
I Bet You Look Good on the Dancefloor
I Don’t Feel Like Dancing
I Got Rhythm
In the Mood
It Don’t Mean A Thing If It Aint Got That Swing
I Wanna Be Like You
I Will Survive
Just the Way You Are
Keep the Home Fires Burning
Lady is a Tramp
Lay Down Your Arms
Like A Virgin
Little Girl from Little Rock (duet)
L.O.V.E.
Lullaby of Broadway
Minnie the Moocher
Moonlight Serenade
Mr Sandman
Nice Work if you Can Get It
Nightingale Sang In Berkeley Square
Oh Johnny Oh!
Orange Coloured Sky v Paper Moon (medley)
Putting On The Ritz
Salute
Sing Sing Sing
Sisters (duet)
Shout
Stuff Like That There (solo)
That Man
That Old Black Magic (solo)
The Beer Barrel Polka
The Locomotion
Thriller
Toot Toot Tootsie Goodbye
Umbrella
Valerie
Wartime Medley (Kiss Me Goodnight Sergeant Major / Lambeth Walk / Tipperary / Underneath the Arches)
We’ll Meet Again
White Cliffs of Dover
Wiggle
Wonderwall
Yes Sir! That’s My Baby
Zoot Suit Riot
Our repertoire is ever expanding, so let us know your favourite songs as we may well be able to include them at your event!
And just put it on your wish list if you’d like us to tailor-make you a fabulously festive set…
Auld Lang Syne
All I Want For Christmas Is You
Away in a Manger
Have Yourself a Merry Little Christmas
In the Bleak Midwinter
Jingle Bells
Joy to the World
Let It Snow
Let the Snow Keep Falling (a capella medley)
Rocking Around the Christmas Tree
Santa Baby
Santa Claus Is Coming to Town
Silent Night
The Christmas Song
The Gift of Love (original by The Rockabellas)
Warm This Winter
White Christmas
Winter Wonderland
Customer questions

Our standard line up includes the 3 ladies performing with bespoke backing tracks which are operated by our sound engineer. For an exciting live look and sound, our Rockafellas (3pc brass & keys) perform over our bespoke backline tracks for a big band sound at a fraction of the cost! Our final line up is a completely live 6pc backing band for extra impact!

We will ask you to confirm the overall event times when issuing our contract, but we do understand you may not be ready to commit to our specific set times at that point, so don't worry, we can discuss this bit after. Things can sometimes run a little late during the event too, but rest assured we will be as flexible as possible to help things run smoothly.

We supply your choice of iPod music during our break for no extra charge. If you would like our 'virtual DJ' service to play out till the end of your event, we supply this for an additional £150.

We ideally like between 1 and 1.5hrs to set up and sound check in full. If you have a tight room turnaround, let us know and we will ensure we are set up quicker so there is no disruption to your schedule. As soon as our PA is set up, we will play your choice of iPod music to help set the atmosphere and get your guests ready for our performance!

Due to the nature of the show (vintage microphones which require cabling and choreography which is designed around the mic stands) we are unable to room whilst we perform. Rest assured, we are a very interactive group so will involve your guests and engage with our audience without even stepping off the stage!

We have a huge repertoire which we are happy for you to peruse and select favourites from. We will then put them into the perfect order alongside the numbers we know go down a storm at each and every event!

Yes, we are a fully self-contained group bringing all sound and lighting equipment necessary, suitably sized for the space and number of guests within it. That said, if PA is not required (perhaps we are not the only act and a rig is being supplied for everyone), do let us know at the time of quoting so we don't overcharge you!

As our repertoire contains all bespoke intricately arranged 3pt harmony renditions of songs, it isn't possible to just 'throw a new song in' as our backing tracks are crafted from scratch and vocals and choreography must be rehearsed to a show standard. That said, it is always worth asking as you never know what we may already be working on!

Our energetic, eclectic playlist which we tailor make to suit your theme / event / demographic perfectly. We also offer a choice of costumes to ensure we look the part - from military uniform and sailor girl outfits, to pretty floral swing skirts or polkadot wiggle dresses! We offer an unrivalled bespoke service just for you so your event is a true one off!

Too many to mention! We have performed at countless renowned hotels, cute dance halls, large theatres and bespoke entertainment spaces, from the corner of Cornwall right out to Singapore! We have also performed on P&O, Holland & America and Royal Caribbean cruiselines, as well as live on TV and Radio. From postage stamp spaces to massive festival stages!

Hyde Park's Diamond Jubilee Festival where we performed to 30,000 people! Also, 5 consecutive years performing to 6,000 people weekly at The Battle Proms. We have also sung live for Jonathan Ross on his BBC Radio 2 Arts Show, on BBC TV for Ruth Jones' Easter Treat, singing on Tim Minchin, Dawn French and Michael Sheen and for BBC 2's 'What a Performance.'

All prices include:PA equipment (PAT tested and operated by our sound engineer throughout), vintage microphones, colour wash stage lighting (quote for additional dancefloor lighting available on request), tailor-made playlist to suit the demographic/theme of the event, costume change (one per set, client's choice from vast selection), client's choice of iPod music during break

Verified
Laura B, 1 year ago

The Rockabella's were just fantastic, lively, amazing voices and fab costumes, a real all round performance that really made our party. I would highly recommend them!

Thank you for a fantastic gig on Friday evening, your voices and the show were outstanding and every single person in the room was so complementary about the whole event. You and your ladies were so professional, committed and enthusiastic on every level and I think it goes without saying that the evening was a huge success!

I have worked with The Rockabellas on two occasions, first a private event (my own wedding) and then as the headline act at a charity ball for the Portsmouth Guildhall. Sarah, who I always communicate with directly, is incredibly conscientious and professional. She is very hands on, ensuring I get the exact look and sound that befits the event. The band in general performs at a very high level. Their fabulous harmonies, ranging from retro classics to modern day anthems, create a luminous atmosphere with a vintage flair. Backstage their professionalism continues; they are quick to set up and sound check and they always have a smile on their faces! The perfect performers for any occasion, private, public or corporate.

That was amazing, absolutely fantastic"

Your harmonies are a joy to hear, mellifluous and perfect for the music of the 1940s. I believe your music will go a long way